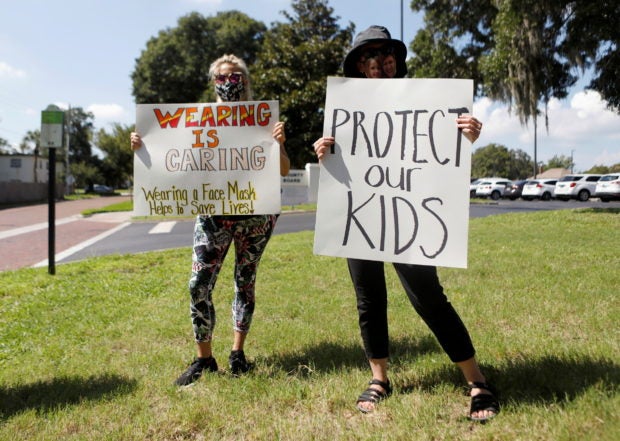 The U.S. Department of Education is opening civil rights investigations to determine whether five states that have banned schools from requiring masks are discriminating against students with disabilities, the agency said on Monday.

The department is targeting Iowa, Oklahoma, South Carolina, Tennessee and Utah, all Republican-led states, in its investigations. It said it was concerned that their bans on mandatory masking could leave students with disabilities and underlying health conditions more vulnerable to COVID-19, limiting their access to in-person learning opportunities.

“It’s simply unacceptable that state leaders are putting politics over the health and education of the students they took an oath to serve,” U.S. Secretary of Education Miguel Cardona said in a statement.

“The Department will fight to protect every student’s right to access in-person learning safely and the rights of local educators to put in place policies that allow all students to return to the classroom full-time in-person safely this fall.”

As millions of U.S. public school students head back to the classroom, numerous school districts and state education agencies are grappling with masking and vaccination requirements, especially in the South where the virus is surging.

After the announcement of the investigations, Iowa Governor Kim Reynolds accused the Biden administration of playing politics.

“I believe and trust in Iowans to make the best health decisions for themselves and their families,” Reynolds said in a news release. “Iowa’s democratically elected legislature endorsed that view as well when they passed a law to support a parent’s right to decide what’s best for their own children.”

Florida, Texas, Arkansas and Arizona are four other Republican-led states that have banned mandatory masking orders in schools. The Education Department left those states out of its inquiry because court orders or other actions have paused their enforcement, it said in a news release.

The department says it is monitoring those states and would take action if local mask-wearing policies are later barred from going into effect.

A Florida state judge on Friday ruled that the state had no authority to enforce an order by Governor Ron DeSantis banning public school districts from requiring masks in classrooms.

Before the ruling, multiple school districts in the state had defied the governor’s order, putting in place mandates that provide exceptions for students with medical conditions.

DeSantis has said his office will appeal the court’s decision.