Whang-od did not consent to Nas Academy masterclass – NCIP 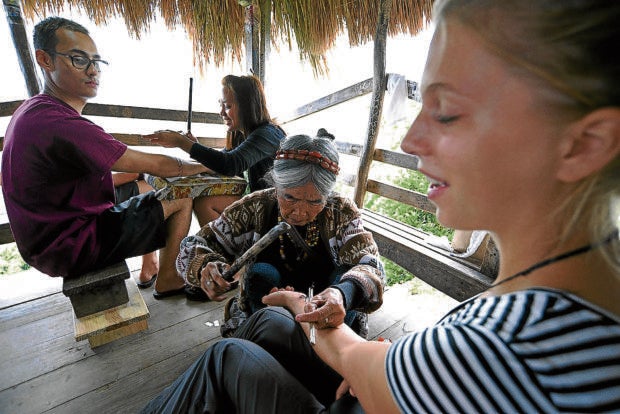 This file photo, taken in Barangay Buscalan in Tinglayan town, Kalinga, in November 2017, shows Apo Whang-od, the acclaimed mambabatok, working with her granddaughter, Grace Palikas, whom she trained. Many tourists, both local and foreign, travel for hours to get a Whang-od tattoo. Some guests have been known to fall in line for two days. (File photo by EV ESPIRITU / Inquirer Northern Luzon)

MANILA, Philippines — The Kalinga mambabatok, or traditional tattoo artist, Apo Whang-od, did not give her consent to teach an online course for Nas Academy, the National Commission on Indigenous Peoples (NCIP) said in a statement issued on Sunday.

The NCIP based its statement on interviews it conducted last Aug. 17 with Maria Oggay (the artist’s full name), her family, and the elders and leader of Barangay Buscayan in Tinglayan, her hometown, in Kalinga.

But according to NCIP, Apo Whang-od was “not aware of any contract and she did not affix her thumb mark in any contract for this account.”

No, Apo Whang-od did not give her consent to teach tattooing in Nas Academy, says NCIP.

According to the findings, Apo Whang-od is "not aware of any contract and she did not affix her thumb mark in any contract for this account." | @tinaarceodumlao pic.twitter.com/GDRfLYk38B

Yassin, who has been criticized for exploiting Philippine culture to gain online engagement, has since taken down the online masterclass after Whang-od’s grandniece called it out for being a “scam.”

However, the vlogger insisted that Nas Daily had always asked the permission of its subjects and their families. On Aug. 5, Nas Academy posted a video that showed Whang-od going through the contract and affixing her thumbprint to it.

But according to the NCIP, there is an “apparent disparity”  between the thumb mark Whang-od put in the contract and the one she affixed to a clean piece of paper for validation.

In addition, the NCIP said that Estella Palangdao, Whang-od’s niece and representative, explained that the “provisions of the contract were not explained to them except that they were made to sign the contract of filming, interview, photography, and release of such.”

The Barangay Buscalan elders and traditional leaders also collectively affirmed that the Nas Daily-led online learning platform could “lead to the demise of their culture-driven tourism industry.”

“Teaching of said cultural manifestation or expression in an open platform accessible to millions of people would render it generic and thus it would lose its authenticity and cultural meaning,” the NCPI said.

Yassin has maintained that his team’s intentions in organizing an online course with the tattoo master are “pure.”

“We did all of this as an act of support, not an act of exploitation,” the vlogger said.

READ: Nas Daily speaks up on Whang-od issue: ‘Our intentions are pure’

The NCIP said it would provide lWhang-od and the community with legal assistance should they want to pursue legal actions.

It also reminded visitors dealing with Whang-od to “be culturally sensitive and exert proper and due diligence considering her stature as a culture bearer of the community.”