Duterte's pronouncement confirms suspicions that the push for a corporate body to run the island will lead to entry of casinos
By: Nestor P. Burgos Jr. - Reporter / @nestorburgosINQ
Philippine Daily Inquirer / 04:35 AM August 30, 2021 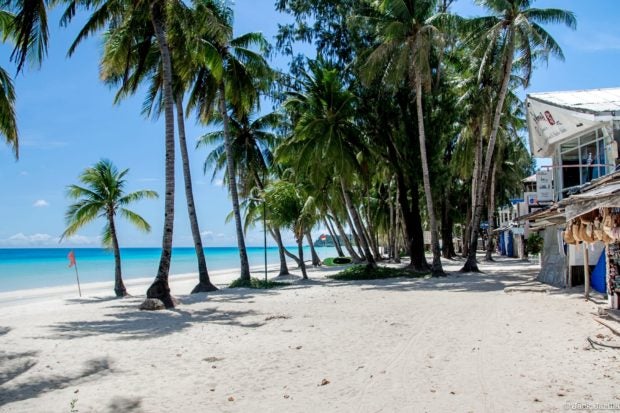 NO GUESTS Boracay is deserted, as leisure travelers are unable to enter the island due to the latest round of lockdowns in this photo taken on Aug. 24. —JACK JARILLA

Instead of addressing the desperate economic plight of the island due to the prolonged and heightened community restrictions, they pointed out that the President is pushing for the casino that has long been opposed on the island.

“Why not focus on vaccinations so that we can open up the island to tourists, especially foreign visitors?” a resident on the island said in an online message but asked not to be named to avoid earning the ire of the President and his supporters.

“No. He can have his casino in other places but not in Boracay,” another local who operates a resort said in an online interview on Sunday.

The president announced on Friday that he would allow casinos to operate on Boracay Island to help generate funds for the government’s COVID-19 pandemic response.

The pronouncement was a reversal of his statements in 2018 when he thumbed down a plan for a casino to operate on the island.

GEG and local partner Leisure Resorts World Corp. acquired a 23-hectare property for the project in Barangay Manoc-Manoc, one of the three villages of the island.

The municipal government of Malay in Aklan province, where the island is located, endorsed the controversial project in 2017 without holding a public consultation. But construction activities were stopped amid opposition from many residents and the Diocese of Kalibo.

Kalibo Bishop Jose Corazon Tala-oc in 2018 said casinos “destroy the moral fiber” of families and resulted in other vices like illegal drugs. “Putting up a casino is not cleaning up Boracay and may even be ‘dirtier’ than the other problems,” he said.

Residents and business owners who opposed casino operations said the latest pronouncement of the President had confirmed their suspicions that the cleanup and rehabilitation of the island and the pushing of a corporate body to take over the administration of the island would lead to the opening of the island to big foreign investments including casinos.

Gil de los Santos, a resident, said the putting up of a casino on the island was the plan all along “with or without the pandemic.”

Aside from posing possible peace and order problems, the operation of casinos on the island is contrary to the island’s image as a family-oriented destination, according to Delos Santos.

The Boracay Interagency Task Force (BIATF) assured the casinos that will rise in Boracay will operate in accordance to existing laws.

“Each line agency will continue carrying out their respective mandates with the goal of ensuring the environmental sustainability of the island,” the BIATF said in a joint statement.

It said all businesses would be required to submit the necessary documents for the accreditation process. “The BIATF will practice due diligence to ensure that only those who are compliant will be issued the necessary permits,” the task force said.

Environmental group Kalikasan People’s Network for the Environment has opposed the Palace’s move, saying the casinos in Boracay may not only lead to an increase in unsafe levels of human waste, but also trigger COVID-19 superspreader events in the island.

“How can casinos serve [in] economic recovery amid the pandemic when travel by tourists will still be restricted?” Leon Dulce, Kalikasan national coordinator, told the Inquirer. “We can’t expect these entertainment facilities to be safe and productive anytime soon.”

Kalikasan said such big-ticket projects, along with the new mining projects and the lifting of the mining moratorium in the country, could be pouring funds in the administration’s campaign kitties for the 2022 elections.

Bagong Alyansang Makabayan in Aklan said the change in the President’s stance on casinos on the island was “not surprising anymore.”

“The Duterte [administration] aims to make Boracay an exclusive tourism zone and an elite gambling haven,” according to its statement.

—WITH REPORTS FROM JHESSET O. ENANO