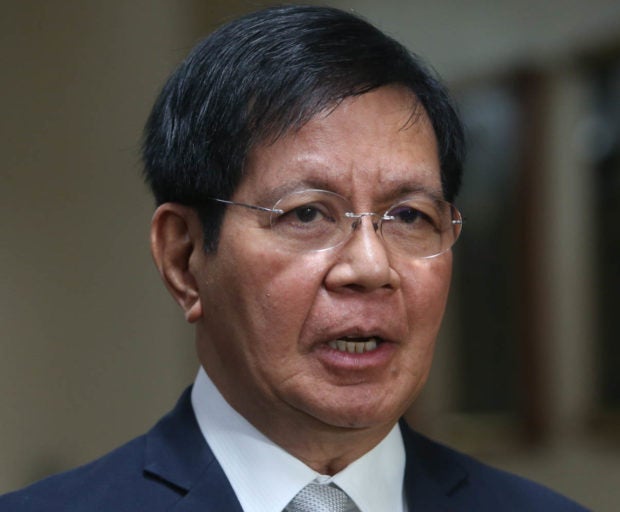 MANILA, Philippines — Sen. Panfilo Lacson on Saturday called for a full-blown investigation of an obscure company and the people who were helping it “hit the jackpot” by cornering P8.7-billion worth of contracts to provide allegedly overpriced medical supplies needed in responding to the pandemic last year.

Lacson said the focus of the senators’ ongoing inquiry, which took off from the Commission on Audit’s report on the deficiencies in the handling of COVID-19 response funds by the Department of Health (DOH), should now shift to the Procurement Service of the Department of Budget and Management (PS-DBM) and Pharmally Pharmaceuticals Corp.

The former national police chief made the call after Sen. Richard Gordon played a video during Friday’s hearing showing Michael Yang, a former “economic adviser” of President Rodrigo Duterte, and officials of Pharmally meeting the President in Davao in 2017.

Gordon, chair of the Senate Blue Ribbon committee, said he showed the video to allow the public to “make the connectivities” on how Pharmally managed to bag deals despite its small capitalization.

Lacson said the Senate should look into the involvement of government officials in awarding of contracts to Pharmally, a “virtually unknown” company with a P625,000 capitalization.

“Those behind the plot were aiming to hit the jackpot in procuring supplies,” he said in a radio interview.

“It is clear that we are looking at large-scale corruption here. What makes it worse is that this is happening with some unscrupulous parties making gains for themselves right in the middle of a pandemic,” Lacson said.

Malacañang did not respond to the Inquirer’s request for comments on Yang’s role and the contracts with Pharmally.

The PS-DBM had awarded contracts amounting to P8.7 billion to supply the DOH with face masks, personal protective equipment, and COVID-19 test kits to Pharmally using P42 billion transferred to it by the DOH.

Senators were told on Friday that the company, which was incorporated in September 2019, had a fictitious office address. The Inquirer learned that the Pharmally received its license from the Food and Drug Administration to operate as an importer-wholesaler of pharmaceuticals and medical devices only in January.

In June, the DOH awarded the company another to supply it with 2,005,860 million pieces of face shields, worth P37.9 million, or P18.88 each, according to a document on the health department’s website.

Lacson said the reasons for transferring P42 billion in DOH funds for the purchase of “common-use supplies and equipment” such as face masks and shields to the PS-DBM should be thoroughly scrutinized.

“Who ordered the transfer of the P42 billion to PS-DBM? Is it not the DOH that has the competence to select the suppliers? Why pass that task to the PS-DBM?” he said. “We should continue to pursue this to its logical conclusion.”

The senator expressed his disgust at people in government and the private sector trying to make money while the country was struggling against the pandemic.

“Making matters even worse is that the money involved came from loans. Shouldn’t we taxpayers get angry over this?” he said.

According to Senate Minority Leader Franklin Drilon, the Blue Ribbon committee should require Pharmally officials to appear in its hearings to “unravel the mystery of these multi-billion peso transactions.”

“[Pharmally] is the biggest supplier of the PS-DBM, so we need to find out who their government connections are,” he said.

A key personality that the senators are looking at for his involvement in concluding the supply contracts is former PS-DBM chief and Budget Undersecretary Lloyd Christopher Lao, who said during Friday’s he had no “backer” in getting that position, not even Sen. Bong Go, the president’s longtime aide under whom he had previously worked.

“I don’t want to speculate because we are really being fooled by Lao. He is saying he did not have a backer, and that he applied for the job, which of course, is rubbish. Senator Go, on the other hand, says he does not know anything, and Lao was not his aide,” Drilon said. “So, that’s the mystery. Something is being hidden, and someone is being shielded.”

In the case of face masks, he said the Philippine Red Cross buys them for only P5 pesos apiece, compared to P22 to P27 under those contracts, he said.

Drilon said Pharmally went from zero income to nearly P300 million in just one year after bagging the contracts. This was a clear indication that some people raked in profits, he said.

Yang, is another personality that the senators could investigate because of his links to Pharmally as shown in the 2017 video.

In November 2018, Malacañang confirmed that Yang, a Chinese national also known as Yang Hong Ming, was one of the President’s consultants on “particular matters” a month after denying that he was.

Then presidential spokesperson Salvador Panelo said Mr. Duterte was consulting Yang “every now and then.”

“He has a technical love on running [a] business and also because he is Chinese, he knows a lot of people the Chinese government. And he knows the psychology of China. On that aspect, the President needs people like him,” Panelo said.

Yang became controversial after he was linked to illegal drugs, but the President himself cleared his adviser of any involvement in the narcotics trade and that he was close to then Chinese Ambassador Zhao Jianhua.

In March 2019, Eduardo Acierto, the dismissed deputy director for administration of the police Drug Enforcement Group, linked Yang to the illegal drugs trade.

He accused the president and Sen. Ronald Dela Rosa, a former national police chief, of dismissing an intelligence report about Yang’s supposed links to illegal drugs.

But Malacañang maintained that Yang was not involved in illegal drugs.

A few days later, Malacañang announced that Yang was no longer an economic adviser of Mr. Duterte as his one peso per annum contract ended on Dec. 31, 2018.