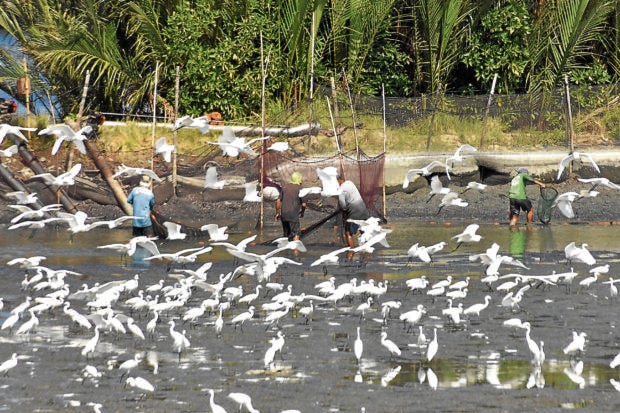 FEEDING TIME In this file photo, workers continue cleaning a fishpond in Binmaley, Pangasinan province, after a harvest of “bangus” (milkfish) as flocks of migratory and local birds feed on whatever is left on pond beds. More than a dozen sites in Pangasinan host migratory birds.—WILLIE LOMIBAO

BINMALEY, Pangasinan, Philippines — There is more to this town than its famous “bangus” (milkfish) and tilapia.

As soon as the harvest season is over, hundreds of birds, mostly egrets, take over and swarm into the town’s fishponds in search of whatever is left in areas drained of water.

The sight never fails to delight travelers along the highway that cuts through the expansive marshes of Binmaley, especially in Biec village, which has been officially recognized as an important wetland by Wetlands International, a nonprofit organization dedicated to the conservation and restoration of the world’s wetlands.

Most of the birds seen here are migratory species but egrets, notable for their slim and long legs and long black beak, have been observed to stay longer, said Maria Angelica Esteban, a personnel of the Community Environment and Natural Resources Office (Cenro) in central Pangasinan.

According to Esteban, the egrets seem to have made Pangasinan’s wetlands and mangrove forests their home, as they are seen in these areas all year-round. In fact, residents have given them a local name — “dulakak.”

Esteban’s office conducts the annual count of migratory and local birds in Binmaley for the Asian Waterbird Census (AWC) every January.

She said the birds used to come only from September to February to escape the winter months in Japan and China, and seek the warm temperature of the Philippine wetlands and farmlands, which provide them abundant food.

But climate change appeared to have affected the birds’ migration pattern.

“Years ago, they started arriving by August but now they come here in September or even late October,” she told the Inquirer.

Pangasinan’s wetlands host migratory birds in over a dozen sites—three in Alaminos City, four in Bolinao, two in Infanta, and one each in Burgos, Dasol, Sual and Bani towns.

The Bangrin mangrove forest in Bani covers only 44 hectares, but flocks of birds of different species stay there for months every year.

Last January, a count done by the Cenro in Alaminos City recorded 32,260 birds belonging to 13 species at Bangrin.

Except for the Philippine duck that is classified as “vulnerable,” all the other birds are listed under “least concern” by the International Union for Conservation of Nature’s Red List of Threatened Species. 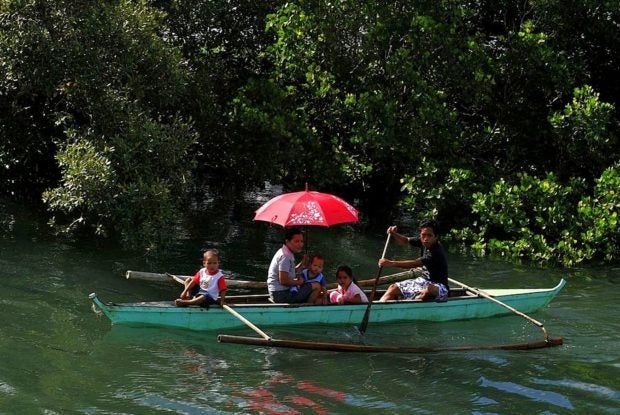 PRECIOUS RESOURCE Residents of Bani, Pangasinan, are protective of their mangroves as these serve as breeding and nesting grounds of both marine species and birds. —PHOTOS BY EV ESPIRITU AND CENRO CENTRAL PANGASINAN

The forest, which is accessible by boat, is a protected area established in 1990 by the town’s late mayor, Marcelo Navarro Sr. The book “Bird Watching in the Philippines” lists it as one of the 13 best bird-watching sites in the country.

But since the pandemic struck last year, no bird watcher has visited the area, said Romel Dulay, the municipal tourism officer.

Visitors to the forest must strictly follow rules to avoid disturbing the birds, especially those that are nesting. Silence is a must while roaming through a catwalk that snakes around the forest.

“They (visitors) cannot use radio or other sound equipment, or play loud music, inside the forest. Even boatmen have to turn their motors off when they are near, and must only paddle toward the docking area,” Dulay said.

The local government has also prohibited the use of firecrackers by fishpond owners and operators to scare birds, which feed on fingerlings.

“The pond owners just hang colorful fabrics around the ponds, as birds are said to be averse to colors, to shoo them away,” he said.

But birds at Bangrin protected area are lucky. “Since the place is far from communities and the local government strictly enforces laws to protect them, they can peacefully exist and forage in the area,” Dulay said.

It’s a different story for birds at Biec wetlands in Binmaley.

According to Esteban, urbanization is closing in on their habitats, which are being converted into commercial areas. Business establishments, restaurants and other structures are rising fast in private property where fishponds used to operate.

“We cannot stop development in the private properties but we can no longer observe the birds in the usual sites,” she said.

Despite the loss of some of their habitats, more birds were counted in the 2021 AWC compared to the 2020 AWC at the Biec wetland, a Cenro report showed.

Missing this year are herons, barn swallows and brown shrikes, the report said. However, another kind of bird not seen in previous years, greenshanks, came for shelter.

But Esteban, who helped prepare the report, surmised that some birds could have been “missing” during the observation day only, as they could have arrived in the country but were in other areas during the census.

She admitted that the AWC results might not yield an accurate number, especially that this year, it was conducted only for a day and not the usual three days in the past.

But egrets remained in high number—about 500 each of intermediate egrets and great egrets, and 50 little egrets.

An information center features photographs of migratory birds on its wall and a view deck that was established years back by the Alaminos City government and Metro Pacific Investments Corp. as part of its corporate social responsibility.

The city government has put up an observation tower from where visitors can watch birds perched atop the mangroves.

At the wetlands under the care of the Cenro Alaminos, the number of birds slightly decreased this year, although the pandemic was an opportunity for the birds to reproduce as they are not greatly affected by human activities.

According to Chester Casil, head of the Cenro Alaminos, his agency regularly patrols and monitors the coastal areas to protect the wetlands and their annual “guests.”

Also, the Cenro has partnered with local governments and nongovernmental organizations to protect the wetlands through regular communication, education and public awareness campaigns.

Some residents are hired to serve as “bantay dagat” (sea patrol) to monitor marine resources that serve as the breeding, nesting and feeding ground of birds, which are protected under Republic Act No. 9147 (Wildlife Resources Conservation and Protection Act of 2001).

Esteban said the migratory birds were a sight to behold and best enjoyed from afar. “After all, they are wild animals and are fearful of humans and would fly away once you come near them,” she said.