‘We will not forgive,’ Biden says after Kabul airport carnage 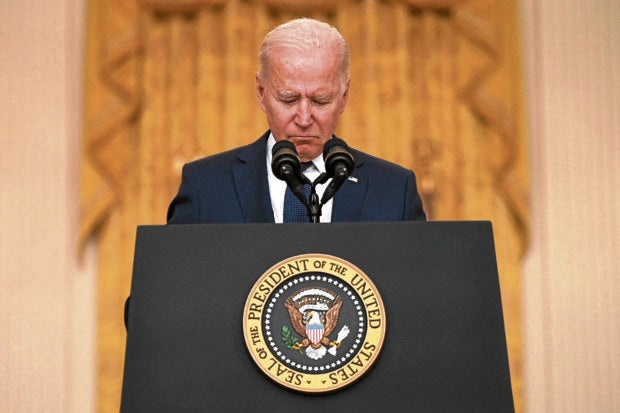 United States forces helping to evacuate Afghans desperate to flee Taliban rule braced for more attacks on Friday after an Islamic State (IS) suicide bomber killed 92 people, including 13 US soldiers outside the gates of Kabul airport.

Two blasts and gunfire rocked the area outside the airport on Thursday evening, witnesses said. Video shot by Afghan journalists showed dozens of bodies strewn around a canal on the edge of the airport.

A health official and a Taliban official said the toll of Afghans killed had risen to 72, including 28 Taliban members, although a Taliban spokesperson later denied that any of their fighters guarding the airport perimeter had been killed.

IS, an enemy of the Taliban as well as the West, said one of its suicide bombers targeted “translators and collaborators with the American army.”

US officials led by President Joe Biden vowed retribution. “We will not forgive. We will not forget. We will hunt you down and make you pay,” Biden said during televised comments from the White House.

He said he had ordered the Pentagon to plan how to strike IS-Khorasan (IS-K).

The IS affiliate, named after the Central Asian region which IS claims as a province, said it was responsible for the Kabul airport attack.

Gen. Frank McKenzie, head of US Central Command, said US commanders were on alert for more attacks by IS, including possibly rockets or car bombs targeting the airport.

“We’re doing everything we can to be prepared,” McKenzie said, adding that some intelligence was being shared with the Taliban and that he believed “some attacks have been thwarted by them.”

US forces are racing to complete their withdrawal from Afghanistan by Aug. 31, the deadline set by Biden.

The US President said the United States had long ago achieved its 2001 rationale for invading Afghanistan of rooting out al-Qaida militants and preventing a repeat of the Sept. 11 terror attacks.

A spokesperson of the US Central Command said 18 soldiers wounded in the attack were “in the process of being aeromedically evacuated from Afghanistan on specially equipped C-17s with embarked surgical units.”

Video taken after the attack showed corpses in a wastewater canal by the airport fence, some being fished out and laid in heaps while wailing civilians searched for loved ones.

“I saw bodies and body parts flying in the air like a tornado blowing plastic bags,” said one Afghan witness. “That little water flowing in the sewage canal had turned into blood.” 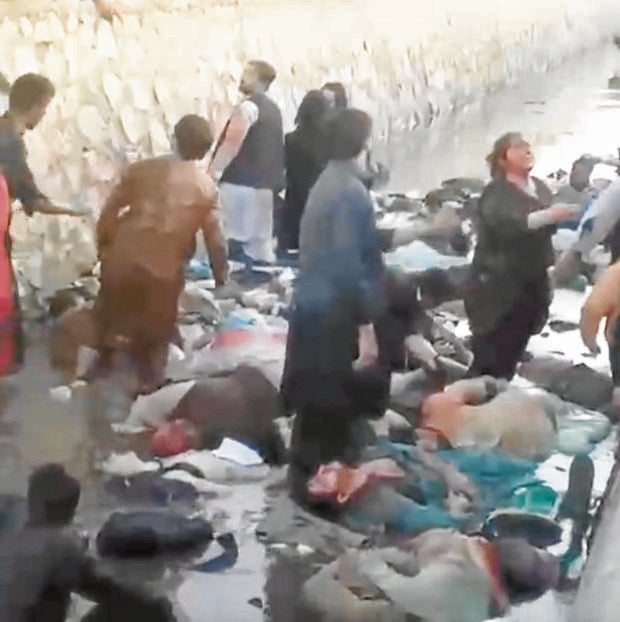 SLAUGHTER A video shows the dead and injured scattered outside the Kabul airport, following Thursday’s suicide bombing. An affiliate of the Islamic State claimed responsibility for the attack. —REUTERS

Zubair, a 24-year-old civil engineer, said he was close to a suicide bomber who detonated explosives. “I saw many injured people—men, women and children—being loaded into private vehicles and taken toward the hospitals,” he said.

A Taliban official lamented the number of his members killed, saying they had lost more men than the Americans.

But Taliban spokesperson Zabihullah Mujahid later said no Taliban were killed in the twin blasts. “That part of the airport is under the direct control of US forces so we weren’t there,” he told Reuters.

A Nato country diplomat in Kabul said all foreign forces were aiming to evacuate their citizens and embassy employees by Aug. 30. The Taliban should tighten security around the airport, said the diplomat who declined to be identified.

Western countries fear that the Taliban, who once sheltered Osama bin Laden’s al-Qaida, will allow the country to turn again into a haven for militants. But the Taliban say they will not let Afghanistan be used by terrorists.

The Combating Terrorism Center at West Point says IS-K includes Pakistanis from other militant groups and Uzbek extremists in addition to Afghans.

The United States would press on with evacuations despite the threat of further attacks, McKenzie said, noting that there were still about about 1,000 US citizens in Afghanistan.

In the past 12 days, Western countries have evacuated nearly 100,000 people. But they acknowledge that thousands will be left behind when the last US troops leave by the end of the month.

The American casualties in Thursday’s attack were believed to be the biggest number of US troops killed in Afghanistan in a single incident, since 30 personnel died when a helicopter was shot down in 2011.

The US deaths were the first in Afghanistan in 18 months, a fact likely to be cited by critics who accuse Biden of recklessly abandoning a stable and hard-won status quo by ordering an abrupt pullout. —REUTERS