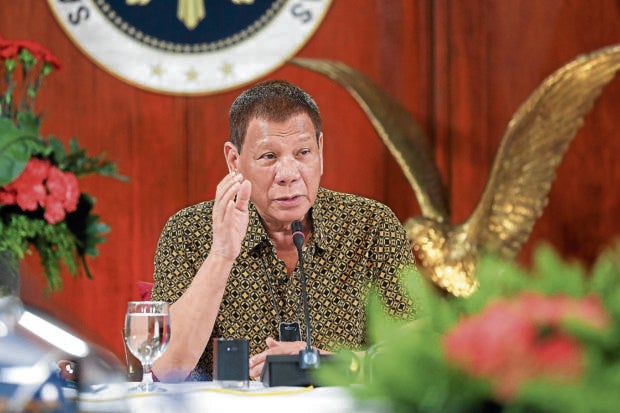 President Rodrigo Duterte, who has kept his statement of assets, liabilities and net worth (SALN) secret since 2018, has volunteered to “audit” himself and all other government agencies if elected vice president next year.

“Somebody should do it,” the President said during his weekly televised address aired late Thursday. “I will do that if I become vice president. I will also be the one to audit everything in government. All, including mine. I can start with mine.”

Mr. Duterte made the bizarre suggestion as he questioned officials on who audited the Commission on Audit (COA), which earned his ire for its audit reports flagging massive deficiencies in the Department of Health’s pandemic operations.

“Who audits the COA? May I ask that question?” Duterte asked. “Just because your job is to examine, you will no longer be examined. That’s the problem.”

Mr. Duterte said it was “not good” to have nobody auditing the COA, only hours before the COA posted on its website, as it has regularly done in the past, an audit of its own operation.

But the President himself is no model of transparency, having refused to disclose his SALN for the past three years. His 2017 SALN was the last to be made public and released in 2018.

The President’s critics dismissed Mr. Duterte’s remarks as a “sick joke” that is also “unethical, absurd and outrageous.”

ACT Teachers Rep. France Castro said the President should just “start with himself [and] release his SALN as mandated by law. He has no right to say he will end corruption. He should start by releasing his SALN.”

Bayan Muna Rep. Carlos Zarate said: “We all know that’s just [another] jet ski joke,” referring to Mr. Duterte’s 2018 pledge that he would defend Philippine sovereignty even if he had to ride a jet ski to the Spratly Islands.

“Nobody is laughing at that sick joke because it will again undermine constitutional processes, especially the COA’s authority to check on public expenditures and guard our limited resources,” Zarate said in an online press briefing on Friday.

Bayan Muna Rep. Ferdinand Gaite called the President’s remarks “absurd” and dismissed the remarks as a ploy to divert attention from corruption in the Duterte administration.

“They are really in fire-fighting mode … Mr. Duterte can’t even run the government … Can he audit himself? I doubt it,” Gaite said, adding that an auditor should be independent and impartial.

Gabriela Rep. Arlene Brosas said it was “unethical to audit oneself and also unethical for an incumbent President to run as vice president.”

“My suggestion is for our people to no longer watch his midnight talk, because it just gives us a headache,” Brosas said. “There is nothing more to expect from those who are in power.”

Kabataan Rep. Sarah Elago remarked that “no one is laughing” at the President’s latest “joke that is just a part of the Duterte administration’s late night show.”