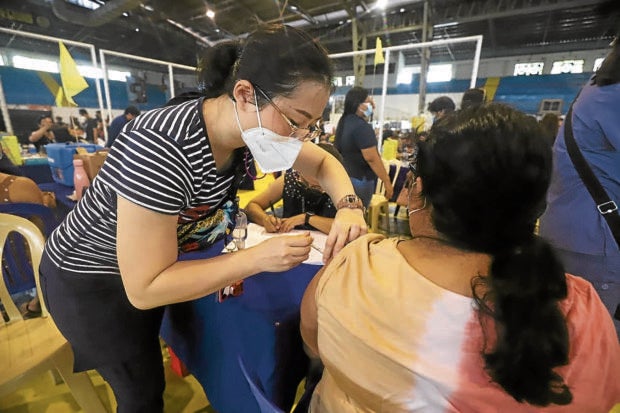 FILE PHOTO: A health worker administers a dose of the COVID-19 vaccine to a resident. PHOTO COURTESY OF OFFICE OF ILOILO CITY MAYOR

ILOILO CITY—This city has opened its COVID-10 vaccination rollout to neighboring provinces amid a continued surge believed to be caused by the more contagious Delta strain.

Mayor Jerry Treñas said the city government would accept even non-city residents who want to be vaccinated in its seven vaccination sites every Thursday.

They do not need to have reservation tickets but will be required to present valid identification cards.

“Iloilo City can inoculate a total of 13,000 individuals a day. We have also opened our vaccination program to everyone willing to be immunized every Thursday and had successfully inoculated 9,740 residents of other provinces during the day we commenced,” Treñas said in a statement Saturday.

Treñas said about 75 percent of the target population remains unvaccinated.

The city government has intensified its vaccine information campaign and put up barangay-based vaccination centers to provide easier access to the elderly and bed-ridden residents.

He appealed to residents to have themselves vaccinated, citing the continued surge in cases in Western Visayas and other areas of the country.

“We need to vaccinate as many as we can. The Delta variant is more infectious and more virulent,” the mayor said.

In the city alone, 280 residents are in quarantine facilities, and 526 are isolated in their homes as of Aug. 16.

The curfew in the city will be reverted from 8 p.m. to 4 a.m. starting on Monday as part of efforts to stem the spread of the virus.

The Department of Health in Western Visayas reported 10,466 active cases as of Aug. 21, including at least 496 new cases in one day.

Fifteen of those infected died, raising the fatalities in the region since March last year to 2,345.