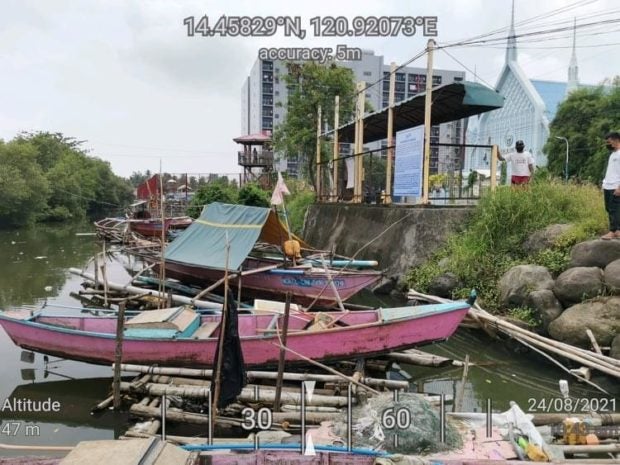 The Cavite Task Force Group for Manila Bay installed billboards at conspicuous places in the municipalities of Noveleta and Kawit, Cavite and cities of Cavite and Bacoor notifying the public regarding the dismantling of illegal aquaculture structures in the said areas. Image from Facebook / DENR Calabarzon

MANILA, Philippines — A fishermen’s group on Thursday condemned as “unjust and anti-fisherfolk” the order of the Department of Environment and Natural Resources (DENR) to dismantle fishing and aquaculture structures in four coastal towns in Cavite in a bid to regulate fishing structures in Manila Bay and its tributaries.

Pambansang Lakas ng Kilusang Mamamalakaya ng Pilipinas (Pamalakaya) said the move will bring “widespread destruction” to the livelihood of 15,000 fisherfolk who eke out a living in Manila Bay through aquaculture.

“The real targets of this Manila Bay ‘clean up’ are the poor fishing and coastal population across the bay… (instead of the) toxic emitting and pollution spawning industrial and commercial establishments,” Pamalakaya national chairperson Fernando Hicap said in a statement.

“We warn of a strong opposition against this destruction of our livelihood and fishing waters under the guise of a bogus clean-up drive,” he added.

The group said the Cavite Task Force Group for Manila Bay had installed billboards in the municipalities of Noveleta, Kawit, and cities of Cavite and Bacoor in Cavite province, notifying the public of the demolition of alleged illegal fishing structures in Manila Bay.

The demolition, which will begin on September 7, is in compliance with the directive of DENR Secretary Roy Cimatu to regulate fishing structures in Manila Bay and tributaries.

LOOK: The Cavite Task Force Group for Manila Bay installed billboards at conspicuous places in the municipalities of…

Pamalakaya claimed that this regulation would take away the livelihood of around 15,000 fisherfolks and coastal residents in the affected towns who depend on Manila Bay for culturing mussels and oysters.

“Why make a fuss on the bamboo poles washed along the shore when in the first place, these are not pollutants that can cause damage to the marine ecosystem unlike plastic and other solid wastes? It’s common sense that disposed bamboos will naturally submerge in water and eventually decompose,” Hicap said.

Hicap, a resident fisherman in Rosario, Cavite, pointed out that some of Pamalakaya members in Bacoor and Cavite City rely on Manila Bay’s aquaculture industry for livelihood, stating that DENR’s directive’s would directly affect them. McKenzie Kinsella