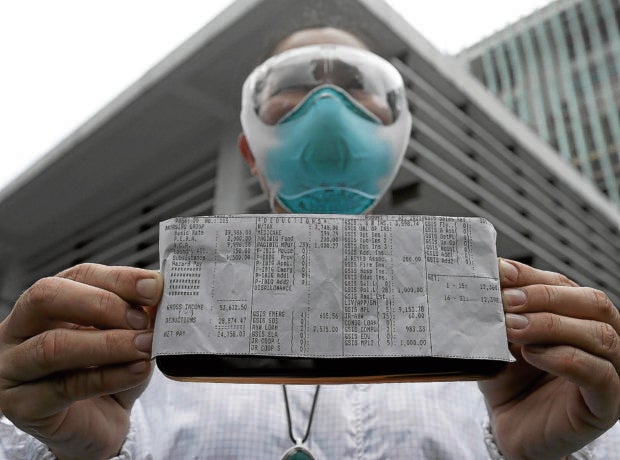 READ AND WEEP Cristy Donguines, a government nurse, shows her payslip during a protest action outside Jose R. Reyes Memorial Medical Center in Manila on Wednesday, the same day the budget department announced the release of P311.8 million to fund the special risk allowance of some 20,000 overworked but underpaid health workers. —RICHARD A. REYES

MANILA, Philippines — The Department of Budget and Management (DBM) on Wednesday released P311.8 million in special risk allowances (SRA) for the overworked yet underpaid health-care workers fighting in the frontlines against COVID-19.

Documents showed that the DBM issued two sets of special allotment release orders (Saros)—one Saro amounted to P280.1 million to cover both private and public health-care workers’ SRA, while a separate P31.7 million was allotted only for public health workers.

In a statement, the DBM said the funds for the SRA were sourced from the miscellaneous personnel benefits fund and unprogrammed appropriations under this year’s P4.5-trillion national budget.

These latest releases for the SRA will be paid to 20,208 public and private health workers who directly dealt with COVID-19 patients between Dec. 20 last year and June 30 this year.

They will receive up to P5,000 per month on a prorated basis which reflect the number of days that the health-care workers reported for work that month.

“The Department of Health shall facilitate the downloading of the funds to the DOH-retained hospitals, treatment and rehabilitation centers, private hospitals and other COVID-19 facilities,” the DBM said.

The fund release came three days after President Duterte ordered to give these payments to health-care workers.

In a separate statement, the DBM said it also issued Budget Circular No. 2021-2, which upgraded Nurse 2 positions in public hospitals to salary grade (SG) 16 from SG 15 previously. However, it reinstated the previous SG levels for Nurse 3 to 7 positions.

“The provisions stipulated in Budget Circular No. 2021-2 shall be effective not earlier than June 1, 2021. The DBM would like to emphasize that the modification of the position attributes will not result in the reduction in the salary of the incumbent nurses. Moreover, the new salary rates will be guided by the second-tranche monthly salary schedule for the national government … and will be adjusted at the same salary steps as those of previous SG allocation of their positions,” the DBM said.