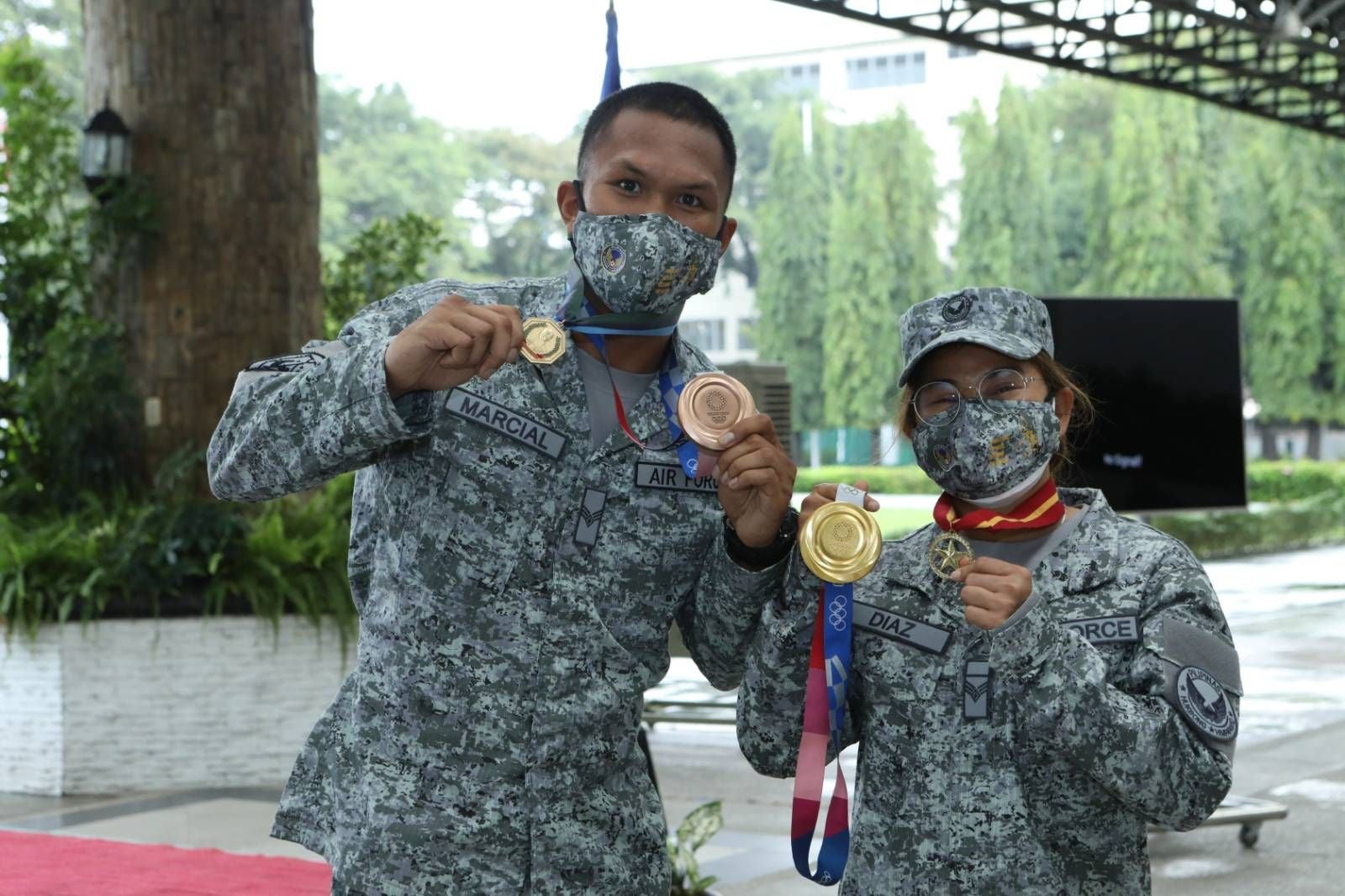 MANILA, Philippines—Olympic medalists Hidilyn Diaz (gold) and Eumir Marcial (bronze) on Wednesday (Aug. 25) were conferred with awards by the Armed Forces of the Philippines (AFP).

The two athletes are active enlisted personnel of the Philippine Air Force.

She was also given a plaque of recognition, the Philippine flag, and a token from the military leadership.

“What Diaz has done was to bring hope and inspiration to millions of our fellow Filipinos, who up until this day continue to battle against the deadly COVID-19 pandemic,” AFP vice chief Lt. Gen. Erickson Gloria was quoted as saying.

Sergeant Eumir Marcial, who brought home a bronze medal from the men’s boxing middleweight division in the Tokyo Olympics, was awarded a Chief of Staff, AFP Commendation Medal and Ribbon.

The AFP also recognized other Olympians who bagged medals—Nesthy Petecio and Carlo Paalam who both delivered silver medals for the Philippine boxing team.

Paalam recently joined the Philippine Navy with a rank of apprentice seaman.

The AFP has a program of direct enlistment that enables athletes to join its ranks, allowing them to have access to training facilities and be included in the AFP regular payroll.

There are currently 128 military athletes and coaches who compete in various sport events, the AFP said.

Read Next
VP run for a ‘tired’ Duterte raises eyebrows, questions
EDITORS' PICK
A delightful blessing!
Gov’t plans to open COVID-19 vaccination for 5- to 11-yr-olds by January 2022
Gov’t eyeing COVID-19 vaccine booster for essential workers, indigents by Dec. 10
Villar Group gears up for AllValue Shopping Party on Dec. 3; around P 1-million promos and discounts up for grabs
Omicron variant detected in more countries as scientists race to find answers
Legarda: Ending Violence Against Women, a cause for all
MOST READ
Quiboloy warns of ‘much worse than Omicron virus’ if his ‘persecution’ is not stopped
Marcoleta defends pol ads on ABS-CBN
MMDA: Number coding during afternoon rush hours back this week
PH updates ‘red list,’ travel ban imposed on 7 more countries
Don't miss out on the latest news and information.