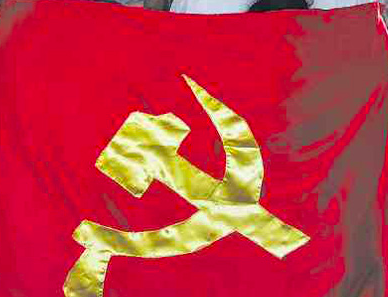 The crimson flag with a golden hammer and sickle that is the logo of the Communist Party of the Philippines. KARLOS MANLUPIG / INQUIRER MINDANAO

The CPP described those who died as “martyrs,” in a statement sent Wednesday, Aug. 25, through its information bureau.

“They were among the best sons and daughters of the people who dedicated their lives to the cause of national freedom and democracy. Their deaths bear hard upon the hearts of the workers and peasants across the country and all the oppressed peoples in the entire world,” it said.

“Their martyrdom inspires us to fight with even greater fortitude and dedication to serving the people and their revolutionary cause. The martyrs of Dolores will forever be remembered,” the communist group added.

The CPP admitted that the high death toll during the attack was a “big loss” to them, but the group said it was just a “temporary setback.”

About 50 guerrillas were in the area doing political, military, economic, education, cultural, and medical work for poor people, the CPP said.

Both the military and the Philippine National Police in the region are on full alert for retaliation by the rebels.

Last Aug. 16, members of the 52nd Infantry Battalion attacked the camp of the communist rebels in Barangay Osmeña, where the rebels manufactured their bombs and improvised explosive devices.

The soldiers took the bodies of those who died and buried them in a public cemetery in Oras, also in Eastern Samar, on Aug. 19.

Military officials in the region described the attack as their biggest victory in recent years against the rebels.