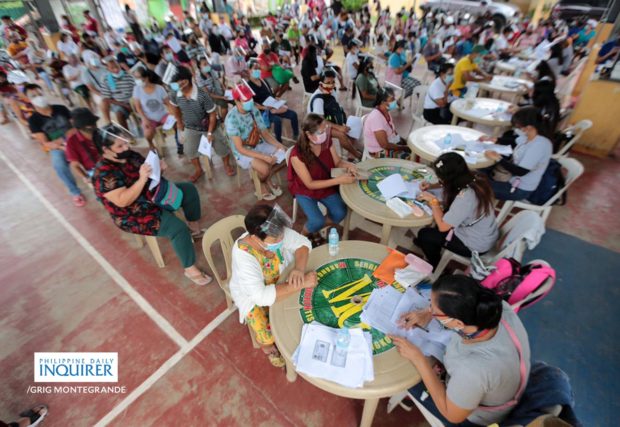 MANILA, Philippines — The Department of the Interior and Local Government (DILG) has extended until Aug. 31 the distribution of cash aid to Metro Manila residents affected by quarantine restrictions.

Interior Secretary Eduardo Año made the announcement in the taped weekly briefing with President Rodrigo Duterte that aired late Tuesday.

So far, only over 8.4 million – or 75% — of the 11.2 million target beneficiaries in the region have received aid 15 days since the distribution started on Aug. 11, Año said.

“Since the deadline is tomorrow [Wednesday, Aug. 25], we will extend the distribution until Aug. 31, 2021 so that we will have enough time,” he added.

Laguna, which is under strict quarantine, has so far distributed over P390 million to more than 390,000 residents.

Bataan has also begun distributing aid with P1.2 million already given to 1,279 residents.

Beneficiaries in these areas are receiving P1,000 each with a maximum of P4,000 per family.

Read Next
Duterte vows to ‘continue crusade’ to run for VP in 2022
EDITORS' PICK
97% of COVID-19 beds at PGH currently occupied
Gear up and get ready to play with Yamaha Mio Gear
Acer starts the year off strong with the Aspire Vero National Geographic Edition
Japan brings back virus restrictions over Omicron surge
Over 3 Million worth of prizes to be won at Smart Padala’s SENDali Manalo Promo!
Uproar over no vax, no ride policy: Maybe it’s time for gov’t to say sorry—Bello
MOST READ
1Sambayan names 7 aspirants in its 2022 Senate lineup
Emma Stone calls Andrew Garfield a ‘jerk’ after he ‘lied’ about his ‘Spider-Man: No Way Home’ appearance
Guevarra to Acosta: Obey rules on unvaccinated
PH to import 60,000 tons of fish to cover shortage
Don't miss out on the latest news and information.