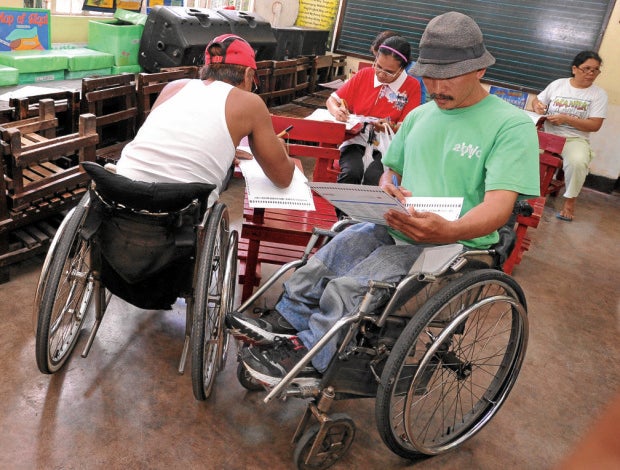 FILE PHOTO: PWDs from Tahanang Walang Hagdan Rey Olitan in white and Elenio Sayod cast their vote side by side at the Marick Elementary School in Cainta, Rizal, on May 9, 2016. INQUIRER/AUGUST DELA CRUZ

MANILA, Philippines — More proposed measures for electoral reforms were approved on final reading by the House of Representatives on Tuesday.

Among them is House Bill No. 9562 or An Act Providing for Early Voting by Qualified Senior Citizens and Persons With Disability in National and Local Election.

Under this proposal, senior citizens and persons with disabilities (PWDs) who would like to vote early should first register to avail of the benefit. Otherwise, they would still cast their votes on the day of the election.

If allowed, eligible seniors and PWDs can vote at designated areas or establishments set by the Commission on Elections (Comelec) within seven working days before election day.

“For national and local elections, there shall be early voting where qualified senior citizens and PWDs may choose to cast their ballot at accessible establishments designated by the [Comelec] within seven (7) working days before the date set for the elections,” House Bill No. 9562 read.

“There shall be a nationwide registration for senior citizens and PWDs to qualify them to avail of this early voting privilege. Those who are not registered under this Act shall vote on Election Day,” it added.

House Bill No. 9562 is seen to address complaints from the elderly and PWDs about difficult access to voting precincts that are usually set up in schools, which are designated as voting centers. Some voting precincts are located on the higher floors of school buildings, which are sometimes not PWD- or senior citizen-friendly.

Voting centers also tend to become crowded, which the elderly and PWDs find too inconvenient especially amid the COVID-19 pandemic.

On the other hand, the proposed law tasks Comelec to ensure the list of registered senior citizens and PWDs and that it designates areas that are aptly accessible for PWDs and senior citizens.

The lower chamber likewise passed on final reading House Bill No. 9785, which amends the Omnibus Election Code in terms of providing more manpower and office spaces for the Comelec.

This particular bill provides that every Provincial Election Supervisor would be assisted by an Election Assistant and other subordinate employees that Comelec may appoint. Also, every City, Municipal, or District Election Officer should be aided by their own assistant and subordinate staffers, according to the measure.

The bill further adds a phrase to Section 55 of the Omnibus Election Code, which allows Comelec to craft its own offices, expenses of which should be charged to the poll body’s regular appropriations.

“The Commission shall provide separate and independent office spaces for its field offices, the cost of which shall be charged to its yearly appropriations,” the bill added in Section 55.

Earlier, the House approved on third reading House Bill No. 9557 which also seeks to amend the Omnibus Election Code by streamlining the process for declaring an aspiring politician as a nuisance candidate.

The bill also mandates a penalty worth P100,000 for any person who would try to file a certificate of candidacy “to put the election process in mockery or disrepute or to cause confusion among the voters by the similarity of the names of the registered candidates.”