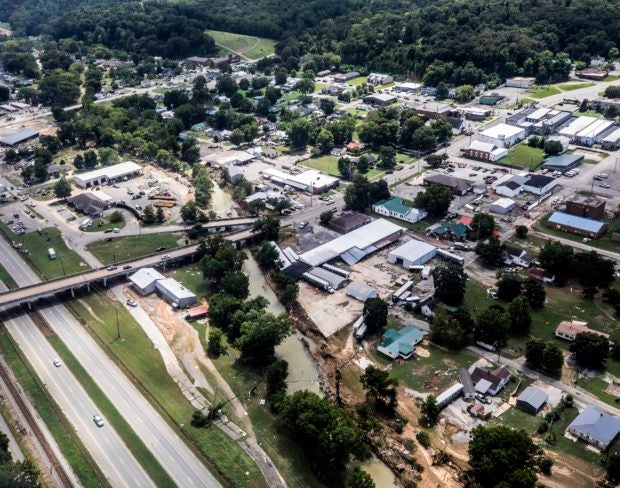 Rescue teams with trained search dogs combed through destroyed homes and piles of debris on Monday for dozens of people believed missing in Tennessee after record downpours and flash flooding left at least 21 dead over the weekend.

Humphreys County Emergency Management Agency said rescuers were going house to house and digging through rubble for about 40 people unaccounted for in the area, directly west of Nashville.

Humphreys County Sheriff Chris Davis said residents and even his officers were overwhelmed with destruction from the storm, with people returning home to find houses ruined and cars swept away.

“Right now, I close my eyes and cannot get over the devastation,” said Davis, who grew up in the community. “Knowing that you grew up in that. Knowing this is your roots. It all comes together and it’s pretty breathtaking,” he said during a news conference.

Authorities said five or six teams of rescuers were searching through the destruction, some using dogs trained to find people.

“We’re going to every home,” said Grey Collier, a Humphreys County Emergency Management Agency spokeswoman. “Many have slid off their foundations, some collapsed. We’re also working along side the creeks, looking for anyone we can.”

Collier said the number of the missing was changing as authorities get more information.

Tennessee Governor Bill Lee, a Republican, said late Sunday he would request emergency assistance from the federal government in the next few days after an initial assessment.

Record rainfall of up to 17 inches (43 cm) drenched some areas, sparking massive flooding on Saturday afternoon and evening. Especially hard hit was the Humphreys County town of Waverly, about 55 miles (88 km) west of Nashville. Hundreds of homes were left uninhabitable.

Waverly Mayor Wallace Frazier told the Tennessean newspaper that those killed in the flooding ranged in age from babies to the elderly. The Washington Post, citing family members, reported that 7-month-old twins died after they were swept away from their parents’ arms.