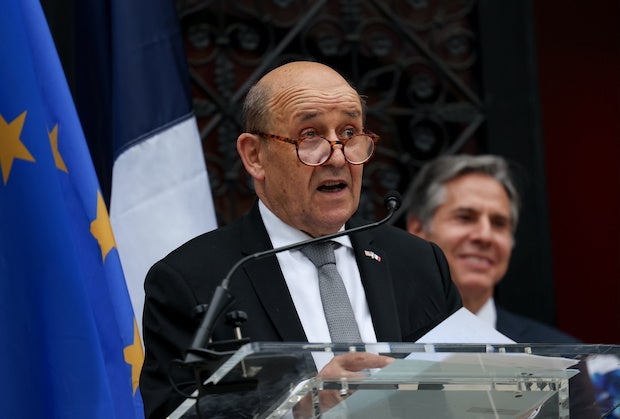 French Foreign Minister Jean-Yves Le Drian delivers remarks at the unveiling of a model of the Statue of Liberty at the French Ambassador’s residence in Washington DC, U.S., July 14, 2021. (REUTERS)

PARIS — France is concerned about the Aug. 31 deadline set by the United States to pull out of Afghanistan, with more time needed to complete evacuations, Foreign Minister Jean-Yves Le Drian said on Monday.

U.S. President Joe Biden has said U.S. troops might stay beyond Aug. 31 to oversee the evacuations. But a Taliban leadership official said foreign forces had not sought an extension – which would not be granted if they had.

“We are concerned about the Aug. 31 deadline set by the United States. More time is needed to complete the current operations,” Le Drian said, according to a French pool reporter accompanying the minister to the United Arab Emirates.

French planes have so far evacuated more than 1,000 Afghans through Abu Dhabi where Paris has a military base, the ministry said earlier.

“We still need to increase our coordination locally with the United States and our partners there,” he said.

Crowds have thronged Kabul airport desperate to flee the country every day since Taliban militants took the Afghan capital on Aug. 15.

Read Next
Villagers evacuated as forest fire spreads near Athens
EDITORS' PICK
Lacson wants DOF to suspend TRAIN law as oil prices rise
Delivering delight against all odds
Next level mobile photography within reach with vivo X70 co-engineered with ZEISS
153 protests filed vs China actions in PH waters in 2021 — DFA
Leaked: A 60x Zoom and all-new Helio G96 mean a complete overhaul for TECNO Mobile’s new CAMON 18 series
Malls, parks in NCR still off limits to minors even with eased restrictions
MOST READ
Matibag calls Senate budget hearing ‘political,’ gets kicked out
Duterte inaugurates P684-M bypass road project in Quezon
Robredo to supporters: Be calm, gentle and do good deeds
Cristine Reyes opens up on her trauma from abuse, painful childhood
Don't miss out on the latest news and information.