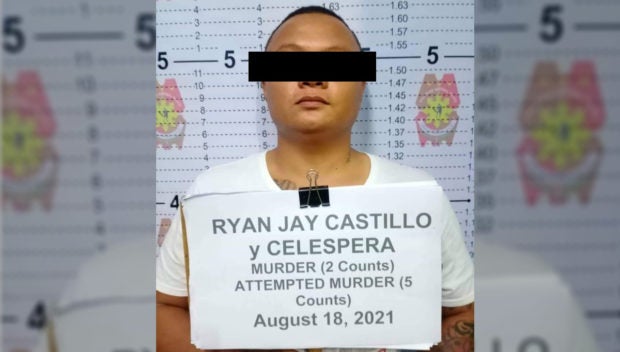 MANILA, Philippines — A drug group leader dubbed most wanted person by the Department of the Interior and Local Government (DILG), has been arrested, the National Capital Region Police Office (NCRPO) confirmed.

The Northern Police District (NPD) — which oversees Navotas police — said that several police units from Navotas City’s intelligence section, along with the Intelligence Group’s Counter Intelligence Division and Pasay City Police Station were monitoring Castillo for several weeks before the arrest was made last Wednesday.

“Upon confirmation of his whereabouts, operatives immediately effected his arrest,” NPD director Brig. Gen. Jose Hidalgo said in his report.

According to NCRPO, Castillo is said to be the leader of the Castillo Drug Group and was responsible for the killing of a certain Ryan Yap last August 2012.

Castillo has pending arrest orders issued by two separate Navotas City courts for murder, while a court in Malabon ordered his arrest for five counts of attempted murder.

Danao said that the arrest of the suspect is a testament that the NCRPO would continue its anti-crime campaign even with the pandemic.

“We will continue in intensifying our anti-criminality campaign despite the challenges of the pandemic,” Danao said.

(We would not allow criminals and those who are accountable to law to roam our region and other nearby provinces.)