In a statement, Velasco said that the transmission of the proposed budget to the House signals the start of the budget season, where lawmakers can scrutinize the fund allocations made by the executive.

“Today, we gladly received from President Rodrigo Roa Duterte—through the Department of Budget and Management—the National Expenditure Program that would assist the legislature in the review and deliberation of the proposed national budget for the fiscal year 2022,” he said.

“This officially signals the start of the budget season in Congress or the legislative process of evaluation, debate, and amendment which we hope could lead to the timely and decisive passage of the 2022 General Appropriations Act,” he added.

Velasco also assured the public that the House would intently and carefully check the budget especially as it contains the government’s roadmap for the COVID-19 response.

Recently, government agencies like the Department of Health (DOH) have drawn flak for allegedly not spending its COVID-19 funds properly, as the Commission on Audit (COA) released reports about DOH funds worth P67.32 supposedly containing deficiencies.

“We, in the House of Representatives, are all set to carry out our constitutional duty of carefully scrutinizing the P5.024-trillion national budget, which includes an allocation of at least P240.75 billion for COVID-19 response,” Velasco said.

“As the coronavirus pandemic drags on and with no end in sight, it is incumbent upon Congress to swiftly pass a national budget that will not only serve as an instrument for development but also as a powerful tool to decisively defeat COVID-19 and rebuild people’s lives and livelihoods,” he added.

Earlier, the Department of Budget and Management (DBM) provided a briefer, showing that a huge portion of the national budget would be allocated to social services, amounting to P1.922 trillion or 38.3 percent of the gross domestic product (GDP). Economic services would get P1.474 trillion or 29.3 percent of the GDP.

DBM also said that most of the budget would be used for personnel services expenditures which will support the hiring of health workers and education staffers, along with the third tranche of the salary standardization law.

“Bulk of the budget, in the amount of P1.456 trillion or 29.0 percent of the FY 2022 NEP, will go to Personnel Services expenditures to cover the hiring of healthcare workers and teaching personnel, the implementation of the third tranche of the Salary Standardization Law V, and the requirements of the 2018 Military and Uniformed Personnel pension arrears, among others,” DBM said in a statement.

“Capital Outlays are pegged at P939.8 billion while Maintenance and Other Operating Expenditures will reach P777.9 billion next year. Debt burden amounts to P541.3 billion, which corners 10.8 percent of the FY 2022 NEP and is lower by 3.4 percent year-on-year. The support to Government-Owned and Controlled Corporations, composed of National Government subsidies and equity, sums up to P178.0 billion while Tax Expenditures remain the same with this year’s level at P14.5 billion,” it added.

Photos on Monday showed House of Representatives officials led by Velasco and Majority Floor Leader Martin Romualdez accepting the 2022 budget from DBM in a quick ceremony at the House complex. 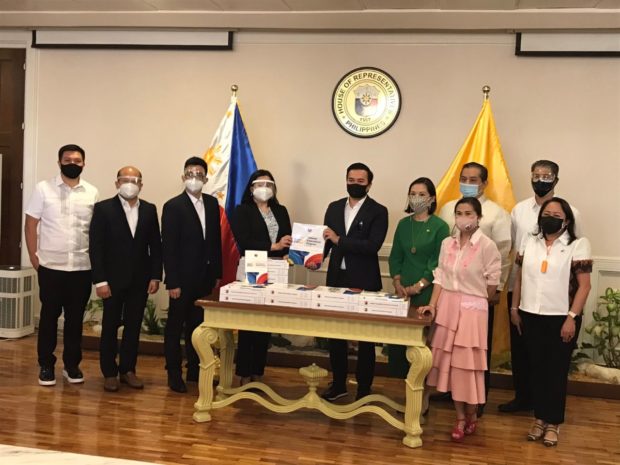 Speaker Lord Allan Velasco and Majority Floor Leader Martin Romualdez pose with officials of the Department of Budget as they receive copies of the 2022 national budget during in a quick ceremony at the House complex. Image from House of Representatives.

Previously, Velasco vowed to tackle bills and other resolutions, including the budget itself, that were not taken up after the House suspended sessions due to the COVID-19 lockdowns.

With the downgrading of the quarantine status over Metro Manila, a small number of House officials and staffers would be allowed inside the plenary hall, while the rest of House members would join sessions virtually to avoid COVID-19 transmissions.