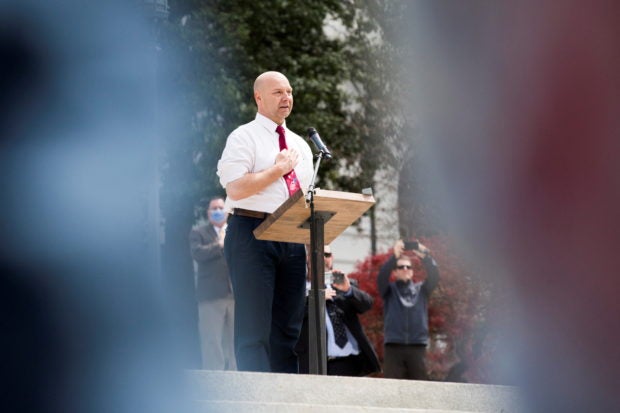 The Pennsylvania lawmaker and ally of former President Donald Trump who has been pushing for a “forensic investigation” into the 2020 election has been stripped of his role overseeing the probe, the state’s top Republican senator said on Friday.

The announcement could mark the end of efforts by state Senator Doug Mastriano, who launched his investigation last month without the explicit backing of Republican leadership in Harrisburg.

In a statement Senate President Pro Tempore Jake Corman accused Mastriano, who is seen as a potential candidate for governor in 2022, of focusing on the “politics and showmanship” of the election probe rather than its substance.

Mastriano, for his part, accused Corman of stonewalling his investigation.

Corman said there was still a need for a “full investigatory audit of recent elections” in Pennsylvania and appointed Cris Dush, a senator who in June accompanied Mastriano on a tour of a contentious election audit in Arizona, to oversee the effort.

“We need someone to lead this effort who is more interested in real results than grandstanding at rallies,” Corman said.

Corman’s move comes after the three counties targeted by Mastriano — Tioga, York and Philadelphia — said they would not comply with his request to hand over voting equipment and other materials. They all cited a warning from the state’s top election official against providing third-party access to machines.

After receiving death threats online last month, the all-Republican board of commissioners in Tioga criticized Mastriano, saying he led people to believe they were trying to conceal something in not complying with the probe.

Mastriano, who has been a leading promoter of Trump’s baseless stolen-election claims, said Corman prevented the committee he chairs from holding a meeting to vote on subpoenas needed to compel the counties.

Pennsylvania has already conducted a so-called risk-limiting audit of the November election, and all counties also audited a sample of their votes as mandated by law. Neither effort turned up widespread fraud to put in question Trump’s loss to President Joe Biden in the state by 81,000 votes.