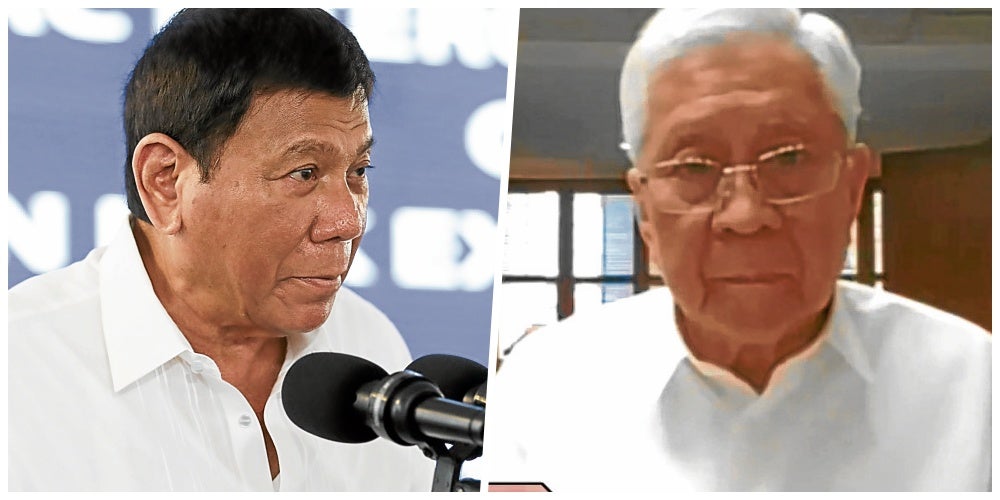 A month after President Rodrigo Duterte accused him of treason, former Foreign Affairs Secretary Albert del Rosario pointed a finger back at his accuser, saying he was the traitor for choosing China over Filipinos and maintaining the “treasonous policy” of setting aside the 2016 arbitral award.

“President Duterte has chosen China over Filipinos because he believes Chinese President Xi Jinping is protecting his presidency in the Philippines,” Del Rosario said at an online forum organized by research and consultancy group Stratbase on Friday.

Addressing Filipinos, Del Rosario said: “Let us be vigilant against traitors in our midst. We know who you are and whom you have embraced with your undying love to the detriment of our country’s patrimony.”

He also urged the voting public to protect the welfare of the next generation by picking the country’s next leaders wisely.

“In this coming 2022 elections, we must vote for leaders who will put Filipinos first before China, money and power,” said Del Rosario, also the chair of Stratbase.

In a taped address aired on July 19, the President accused Del Rosario of treason after the latter said he received information that Chinese high officials had bragged that Beijing had influenced the 2016 elections and helped Mr. Duterte win the presidency.

During his talk, Del Rosario described the July 2016 ruling of The Hague-based Permanent Court of Arbitration invalidating China’s sweeping claims in the South China Sea and recognizing the rights of Filipinos to fish and explore resources in the area as the greatest legacies of the late President Benigno Aquino III.

“There are those who think the Rule of Law in international relations does not apply to Great Powers,” Del Rosario said.

But Aquino rejected that view, he said.

“International Law, [Aquino] maintained, is the great equalizer among states as it allows small countries to stand on an equal footing with more powerful states. President Aquino believed that those who think ‘might makes right’ have it backwards. It is exactly the opposite, in that right makes might,” Del Rosario said.

On the other hand, he said Mr. Duterte, who had only 10 months left to his term before the 2022 elections, “will leave a shameful legacy of squandering the award in a misguided quid pro quo for Chinese loans and investments, which have barely materialized to this day.”