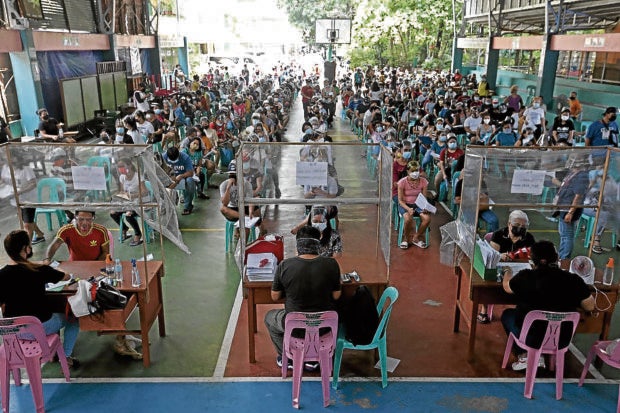 NEVER TOO LATE FOR ‘AYUDA’ At the tail end of the two-week lockdown that started on Aug. 6, Pasay City residents line up to receive cash assistance at Andres Bonifacio Elementary School on Friday. Metro Manila is reverting to modified enhanced community quarantine, a less restrictive status, starting today up to the end of the month. —RICHARD A. REYES

The Employers Confederation of the Philippines (Ecop) on Friday backed the easing of restrictions in Metro Manila, which would be on modified enhanced community quarantine (MECQ) from Aug. 21 until the end of the month.

Sergio Ortiz-Luis, president of Ecop, said the group had not been in favor of the imposition of enhanced community quarantine (ECQ) from the start, so the shift to MECQ was welcome.

“We were afraid [ECQ] might be extended,” Ortiz-Luis said at an online briefing.

An extension would make things harder for workers, he said.

With the shift to MECQ, more businesses would be allowed to operate and the losses from the strictest lockdown, estimated to be P150 billion a week, would be reduced, he said.

Under MECQ, businesses not permitted to operate during ECQ may now do so at 50-percent on-site capacity.

The Ecop president also said the group was in favor of the strict implementation of protocols, especially on persons who are not authorized to leave their homes but are still going outdoors.

Not the only solution

“The members of the IATF have decided that we all need to be strategic and purposive in our responses to control the further spread of COVID-19 and its variants. Community quarantine is not the only solution to the pandemic,” Roque said.

Religious gatherings could only be done virtually.

Benhur Abalos Jr., chair of the Metropolitan Manila Development Authority, on Friday said the imposition of unified curfew hours from 8 p.m. to 4 a.m. in Metro Manila will remain in effect until further notice.

But outdoor exercises will be allowed for the period of MECQ starting Aug. 21, from 6 a.m. to 9 a.m.

With the MECQ classification in effect, Abalos said local governments in the Metro would intensify granular lockdowns in areas where COVID-19 infections had spiked.

Abalos said they would also ramp up vaccination efforts in the National Capital Region, as 79 percent of the 585,000 doses of AstraZeneca that arrived in the country on Friday will be distributed to 38 local governments, including in Metro Manila.

President Duterte’s chief economic manager on Friday described as a “big achievement” the more than doubling of vaccinees during the revert to two weeks of the strictest quarantine level in Metro Manila.

Finance Secretary Carlos Dominguez III told reporters that 4.1 million Filipinos were inoculated with their first dose of COVID-19 vaccines between Aug. 6 and 19.

Dominguez said these past two weeks’ vaccination jumped from 1.6 million during the preceding two-week period of July 23 to Aug. 5.

“The arrival of additional vaccines and the ramped-up vaccination drive for economic front-liners will help the Philippines sustain the gains in containing the virus and eventually lead the way to economic recovery,” said Gil Beltran, finance undersecretary and chief economist said.