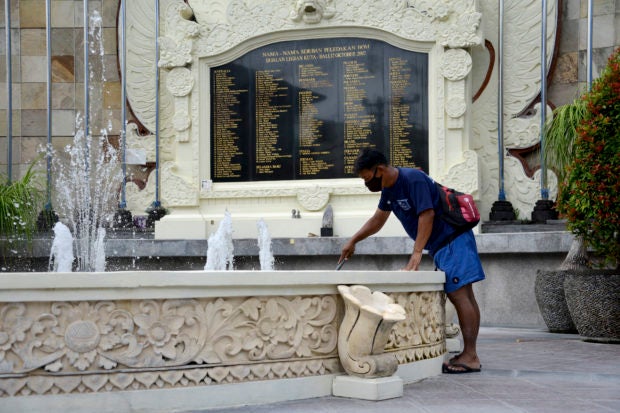 FILE PHOTO: A man cleans a pool of the Bali bombing monument two days before Abu Bakar Bashir, a radical Indonesia cleric linked to the deadly 2002 Bali bombings will be released from prison, in Kuta near Denpasar on Indonesia’s tourist island of Bali on January 6, 2021. (Photo by SONNY TUMBELAKA / AFP)

Jakarta, Indonesia — The extremist group behind the Bali bombings was planning a fresh attack during Indonesia’s independence day celebrations this week, police said Friday, citing militants arrested in a crackdown that netted dozens of suspects.

Indonesia’s counter-terror squad rounded up 53 suspected extremists in nearly a dozen provinces across the world’s biggest Muslim majority nation over the past week, authorities said.

Some suspects admitted that their organization Jemaah Islamiyah (JI) — a terror outfit behind the 2002 Bali bombings — had been planning an attack during the Southeast Asian nation’s independence day holiday earlier this week, they said.

“JI was planning a terror attack on independence day, according to some suspects,” national police spokesman Argo Yuwono told reporters in Jakarta on Friday.

Yuwono did not elaborate on the alleged plot but said police seized weapons and ammunition from the suspects, who were initially arrested on charges linked to fundraising for the group.

JI was nearly dismantled by authorities after bombs ripped through nightclubs on the holiday island nearly two decades ago, killing over 200 people including scores of tourists in Indonesia’s deadliest terror attack.

But the organization has been rebuilding and its spiritual leader Abu Bakar Bashir was released from prison this year after serving time on terror-related charges.

“This operation was aimed at dismantling and exhausting JI,” a counter-terror official who asked not to be named told AFP.

“They’ve been growing again by recruiting, raising money, and beefing up their logistics and weapons.”

The outlawed JI has ties with Al-Qaeda and has been implicated in other attacks over the past two decades.

It has also sent jihadists to fight in conflict-wracked Syria and Iraq, and may be planning to send recruits to Afghanistan after the Taliban’s recent toppling of the country’s US-backed government, the official said.

“In the short run, the biggest impact will be psychological and in terms of morale,” said US-based security analyst Zachary Abuza.

“It reaffirms local militants’ commitment to the cause. If the Taliban can defeat a US-backed apostate puppet regime, then so can they,” he added.

Indonesia, which has suffered numerous terror attacks since the Bali bombings, is home to dozens of extremist organizations, including some loyal to the Islamic State (IS) group.

In March, an IS-inspired Indonesian couple blew themselves up at a church in Makassar on Sulawesi island, killing themselves and injuring dozens.