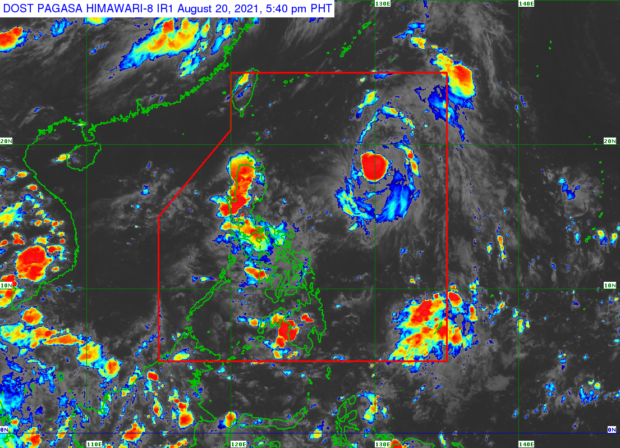 MANILA, Philippines — The country’s climate will remain unaffected by Tropical Depression Isang, the Philippine Atmospheric, Geophysical, and Astronomical Services Administration (Pagasa) said Friday, since its cloud bands are still far away from the Philippines.

Isang, based on Pagasa’s latest weather reports, was last seen 890 kilometers east of extreme northern Luzon, packing maximum sustained winds of 55 kilometers per hour (kph) and gustiness of up to 70 kph. It is moving west-northwest at a speed of 15 kph.

The state weather bureau said Isang is expected to continue moving northwest, and possibly intensify into a tropical storm by Saturday afternoon. Between Sunday morning and Sunday afternoon, it may have already left the Philippine area of responsibility.

It is also seen to weaken into a tropical depression again once it moves over waters between China and Japan.

Despite the weather disturbance, Pagasa said it is only seeing thin clouds over the country which may nevertheless cause isolated rain showers. But for Saturday, state meteorologists said that fair weather conditions may be expected in most parts of the country, including Metro Manila.

(The cloud bands brought by Tropical Depression Isang are still far from the country’s landmass, which means it would not have any direct effect. As of now, we are seeing cloud clusters crossing Bicol Region, parts of the Mimaropa area which indicates that they may see cloudy skies and isolated rains.)

(But for tomorrow, we expect that the whole country, including Metro Manila, would have generally fair weather save for some isolated or localized thunderstorms.)

Pagasa said it would not raise any tropical cyclone wind signals, as well as gale warning, for now since Isang poses no direct threat to the country.