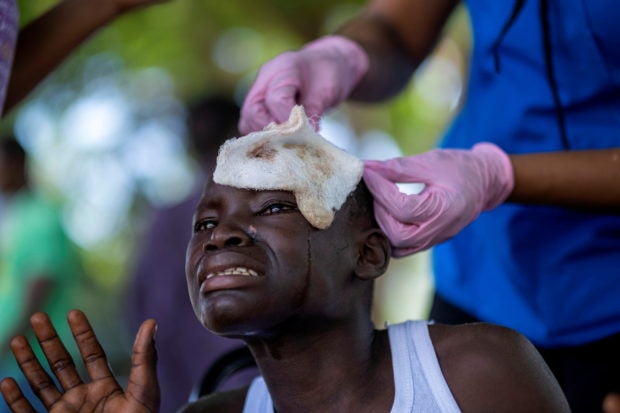 A boy injured after Saturday’s 7.2 magnitude quake cries while being treated at the Ofatma Hospital, in Les Cayes, Haiti August 18, 2021. (REUTERS/Ricardo Arduengo)

CAVAILLON, Haiti  – A drip of foreign aid began to reach more rural areas of southwestern Haiti on Thursday, arriving five days after a powerful earthquake killed more than 2,000 and flattened tens of thousands of buildings into rubble.

Hundreds of people lined up to receive provisions from the U.N. World Food Programme at a camp in the rural town of Camp-Perrin for people displaced by Saturday’s 7.2 magnitude quake. The official death toll stood at 2,189 but was expected to rise.

A mudslide caused by two nights of heavy rain earlier this week had partly blocked the main road leading to the area. Any more rain could make it impassable, locals said. People were sleeping out in a field under trees.

“No one is coming to help us,” said Montette Joseph, a 33-year-old with four children who had traveled two hours in a pickup truck to reach the distribution site. The price of small bags of drinking water had tripled since the quake, she lamented.

“I am looking for assistance so I can rebuild my home and take care of my children. We are living a tragedy.”

Many Haitians have complained about the sluggish arrival of aid, while fresh tremors are adding to anxiety.

In the coastal city of Les Cayes, one of the areas worst hit by the quake, residents were jolted from their beds by a fresh aftershock overnight.

There were no immediate reports of damage, a police officer said. Families slept on mattresses on the streets across the city, nervous about the state of buildings.

Haiti is the poorest country in the Americas, and is still recovering from a 2010 quake that killed over 200,000.

Foreign nations have been ramping up aid deliveries. The United States on Thursday dispatched the warship USS Arlington to offer humanitarian assistance while the U.S. Coast Guard was transporting the injured from Les Cayes to Port-au-Prince.

One flight ferried a newborn baby along with its mother and father, a Reuters photographer witnessed.

The latest disaster struck just weeks after President Jovenel Moise was assassinated on July 7, plunging the nation of 11 million people deeper into a political crisis that has worsened its economic woes.

The national civil protection agency said late on Wednesday 12,200 people were injured in the quake.

But local officials are still tallying the dead.

In the town of Cavaillon, near Les Cayes, officials huddled over paper where they recorded the number of damaged houses, schools and churches in each of the surrounding villages, along with the number of dead and missing.

“We think there are still bodies in the ruins because we can smell them from underneath the rubble,” said Jean Mary Naissant, one of the Cavaillon officials.

According to the tallies for Cavaillon and the small villages around it, there were 53 deaths and more than 2,700 wounded in the area. But there were still 21 people unaccounted for six days after the quake, local officials said.

Residents staged a protest on Monday to demand more assistance to dig out the collapsed buildings, Naissant said, but government help had yet to arrive from the capital, Port-au-Prince, some 180 km (110 miles) to the east.

A village market and hotel nearby were bustling with people when the quake struck on Saturday morning, reducing the area to a great heap of shattered cement and twisted iron rods.

Residents had managed to recover two bodies from the site, said Jimmy Amazan, another local official, but it was believed that more were still buried under the rubble.

“Our hearts are tearing apart; some of our compatriots are still under the rubble,” he said, appealing for the troubled nation to come together at a time of crisis. “The days ahead will be difficult and often painful.”

In Boileau, a farming village about a 20 minutes’ drive from Cavaillon, residents said officials had not arrived yet to document the victims or destroyed buildings, leaving them to wonder whether the damage there was part of the official record.

Renette Petithomme, a police officer, stood in the grass outside her partially collapsed home with her toddler daughter.

She was worried about her father. He had left earlier in the day for Port-au-Prince to seek medical care for a head wound he suffered when the home’s walls fell in, but the public bus had broken down en route.

“Since the earthquake, he’s been losing his senses, having trouble speaking and walking,” she said, adding that the family decided to send him to the capital for treatment after learning that all the nearby hospitals were full.