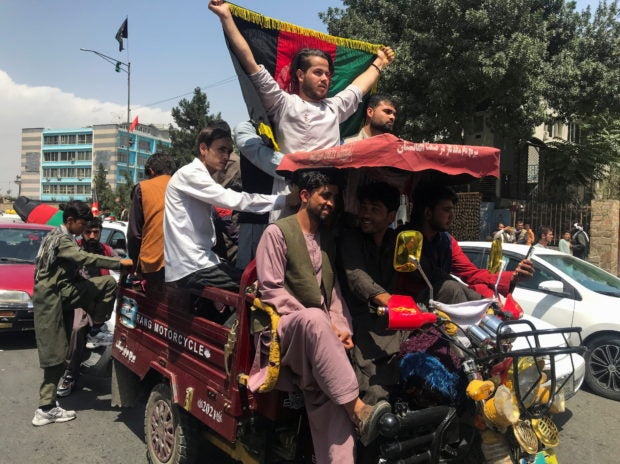 People carry the national flag at a protest held during the Afghan Independence Day in Kabul, Afghanistan August 19, 2021. (REUTERS/Stringer)

KABUL  -The Taliban called on Afghanistan’s imams to urge unity when they hold their first Friday prayers since the Islamist group seized control of the country, as protests against the takeover spread to more cities on Thursday, including the capital Kabul.

Several people were killed when Taliban militants fired on a crowd in the eastern city of Asadabad, a witness said. Another witness reported gunshots near a rally in Kabul, but they appeared to be Taliban firing into the air.

On the day Afghanistan celebrates its independence from British control in 1919, a social media video showed a crowd of men and women in Kabul waving black, red and green national flags.

“Our flag, our identity,” they shouted.

At some protests elsewhere, media reported people tearing down the Taliban’s white flag.

A Taliban spokesman was not immediately available for comment.

Some demonstrations were small, but combined with the desperate scramble of thousands of people seeking to flee the country they underline the challenge the Taliban face in governing.

Kabul has been largely calm, but 12 people have been killed in and around the airport, a NATO and a Taliban official said.

The U.S. military said  more than 5,200 American troops were guarding Kabul airport, where multiple gates to the facility are now open, while U.S. fighter jets were flying over the city to ensure security for the evacuation operation for diplomats and civilians including some Afghan citizens.

The Taliban swiftly conquered Afghanistan as U.S. and other foreign troops withdrew, surprising even their own leaders and leaving power vacuums in many places.

The Taliban urged unity ahead of Friday prayers, calling on imams to persuade people not to leave Afghanistan.

Since seizing Kabul on Sunday, the Taliban have presented a more moderate face, saying they want peace  , will not take revenge against old enemies and will respect the rights of women   within the framework of Islamic law.

When in power from 1996-2001, they severely restricted women’s rights, staged public executions and blew up ancient Buddhist statues. They were ousted in a 2001 U.S.-led invasion.

A report by a Norwegian intelligence group said the Taliban had begun rounding up Afghans on a blacklist   of people linked to Afghanistan’s previous administration or U.S.-led forces that supported it. Complaints by some Afghan journalists   have cast doubt on assurances that independent media would be allowed.

A U.S. lawmaker said the Taliban were using files from Afghanistan’s intelligence agency, the National Directorate of Security, to identify Afghans who worked for the United States.

“They are methodically ramping up efforts to round those folks up,” said Representative Jason Crow, who has been leading efforts in the U.S. Congress to accelerate the evacuation of American-affiliated Afghans. “I’ve had people send me pictures of Taliban outside their apartment complexes, searching for them.”

It was unclear if the Asadabad casualties resulted from Taliban firing or from a stampede.

“Hundreds of people came out on the streets,” witness Mohammed Salim said. “At first I was scared and didn’t want to go, but when I saw one of my neighbours joined in, I took out the flag I have at home. Several people were killed and injured in the stampede and firing by the Taliban.”

Protests flared in the city of Jalalabad and in Paktia province, also in the east.

First Vice President Amrullah Saleh, who said on Tuesday he was the “legitimate caretaker president” after President Ashraf Ghani fled, wrote on Twitter: “Salute those who carry the national flag and thus stand for dignity of the nation.”

Ahmad Massoud, son of guerrilla leader Ahmad Shah Massoud, who was killed by suspected al Qaeda militants in 2001, wrote in a Washington Post op-ed  that he is “ready to follow in my father’s footsteps, with mujahideen fighters who are prepared to once again take on the Taliban.”

Qatar could host fresh talks between the Taliban and the Afghan government as soon as next week to reach an agreement over power sharing and government transition, said two sources familiar with the process and two foreign diplomats.

“Do they want to be recognised by the international community as being a legitimate government? I’m not sure they do,” Biden said in TV interview.

White House National Security Adviser Jake Sullivan, in an interview with NBC News, mentioned U.S. concern over “the potential for a terrorist attack” by a group like Islamic State amid the evacuation.

“We will get any American who wants to get to the airport and who we get in contact with who says, ‘I want to get out and get on a plane,’ we will make that happen,” Sullivan said.

U.N. Secretary-General Antonio Guterres said the Taliban’s desire https://www.reuters.com/world/asia-pacific/un-aid-groups-appeal-afghanistan-funding-vow-stay-2021-08-19 for international recognition is the Security Council’s only leverage to press for an inclusive government and respect for rights, particularly for women, in Afghanistan.

Read Next
AFP: Mindanao security landscape changing
EDITORS' PICK
What to watch out for when selecting a video surveillance solution
DOH says COVID-19 cases plateauing, but public shouldn’t be ‘complacent’
House energy committee chair Arroyo bats for cheap electricity
Unleash the photographer in you this World Photography Day with vivo smartphones
23,000 cops to be deployed nationwide for school reopening
Look Through: The fate of impounded stray dogs
MOST READ
Sharon Cuneta asks for prayers for friend in ICU who suffered silent stroke
Light therapy could be the answer to your sleep problems
Korina Sanchez reunites with former ABS-CBN co-anchors Julius Babao, Cheryl Cosim
PBA: San Miguel ousts Meralco to arrange finals duel vs TNT
Don't miss out on the latest news and information.