Metro buses only for the vaxxed? Palace adviser tackles idea with DOTr 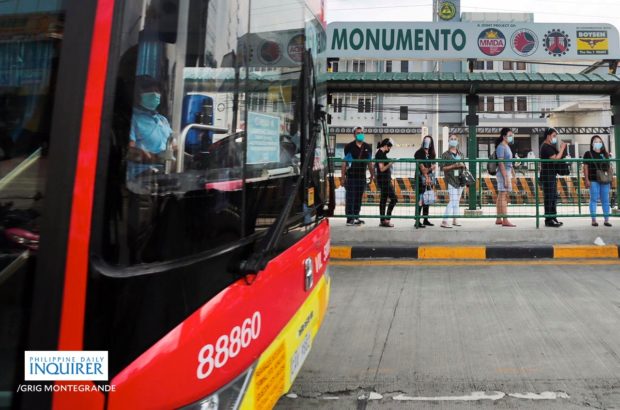 Presidential Adviser for Entrepreneurship Joey Concepcion on Thursday said he was exploring with the Department of Transportation (DOTr) the possibility of vaccinating drivers of public utility buses so that buses meant solely for vaccinated passengers in Metro Manila could be deployed.

Presidential spokesperson Harry Roque, however, said Concepcion’s idea could not yet be implemented since the number of vaccinated Filipinos remained low.

“We are looking at deploying buses for fully vaccinated passengers to protect them from getting infected by the unvaccinated ones,” Concepcion said in a statement.

“With this, our public transportation can actually bridge the gap between homes and workplaces, which will in turn help us create ‘micro-herd immunity’ through the safety provided by these protective bubbles,” the businessman added.

Concepcion, who heads food and beverage company RFM Corp., said most of the company’s factory workers had already been vaccinated, allowing it to achieve what he called “micro-herd immunity” in their workplace.

The founder of the entrepreneurship advocacy movement Go Negosyo said Transportation Secretary Arthur Tugade asked for help in getting 40,000 doses of vaccines for bus drivers. Go Negosyo has entered into a tripartite agreement with the government and vaccine manufacturers to buy vaccines for the private sector.

“Rest assured, we’ll support your initiatives for us to quell the spread of the virus. The entire Department [of Transportation] is willing to assist side by side,’’ Concepcion’s statement quoted Tugade as saying.

The DOTr said over 3,000 drivers and transport workers had so far received their first dose of COVID-19 vaccines under the department’s “tsuperhero’’ vaccination drive for public transport workers launched three weeks ago. These drivers are set to receive their second dose on Aug. 28.

Concepcion said he and the DOTr had prepared a working group that would carry out the plan “when the government approves that only fully vaccinated [people] can enter certain establishments.”

In a statement, NSNPBPI president Vincent Rondaris expressed gratitude for the proposal.

“We also would like to have additional vaccines so we can finally increase our vehicles’ operational capacity,” Rondaris said.

But Roque said the government could only consider deploying public transportation for vaccinated passengers once Metro Manila has achieved population protection. The Palace appreciates Concepcion’s suggestion but it cannot be implemented now since the number of vaccinated Filipinos is still low, he said.

“Maybe once we have reached 50 percent, we could talk about that,’’ he said. “But as of now, the fully vaccinated are a minority.”

It may not be long before half of the eligible population of Metro Manila would be vaccinated, he said.

The Department of Health has been reminding the public that they can still get Covid-19 after being inoculated—cases called “breakthrough infections”—but that vaccines can prevent the infected from becoming symptomatic and prevent hospitalization and death from the disease. —With a report from Mariejo Ramos