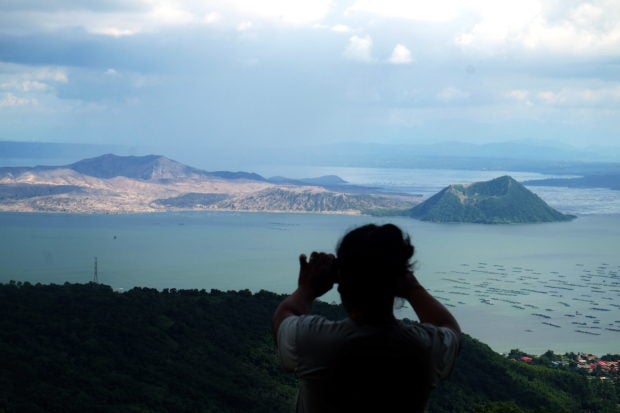 CONTINUOUS MONITORING While Taal Volcano appears to have calmed down in recent weeks, government volcanologists continue to monitor its activity as hazards, like volcanic smog or vog, may affect surrounding communities in Batangas and the rest of Calabarzon region and Metro Manila. —NIÑO JESUS ORBETA

The Philippine Institute of Volcanology and Seismology (Phivolcs) warned residents in areas surrounding Taal Volcano in Batangas province to stay indoors and limit their exposure to volcanic smog, after high levels of sulfur dioxide were recorded from the main crater.

Phivolcs said the volcanic sulfur dioxide, or SO2 flux, from the volcano’s main crater totaled 15,347 tons per day on Thursday morning. Volcanologists said this marked a rising trend in the volcano’s SO2 degassing since Aug. 13, with the short-term average measured at 8,351 tons per day.

“The high SO2 flux, water vapor emitted in plumes, weak air movement and solar radiation will continue to produce volcanic smog, or vog, over Taal region,” Phivolcs said in an advisory on Thursday.

Vog consists of fine droplets of volcanic gas, such as SO2, that can cause irritation of the eyes, throat and respiratory tract. Elderly, pregnant women, children and people with respiratory conditions may experience ill effects following exposure.

Phivolcs said residents in the Batangas towns of Talisay and Agoncillo, particularly in Barangay Barigon, had reported adverse effects from the smog, while hazy conditions were observed over Taal Lake and surrounding towns.

Science Undersecretary and Phivolcs officer in charge Renato Solidum Jr. said satellite data showed that sulfur dioxide aerosol had been dispersed in Metro Manila and in the provinces of Rizal, Laguna, Cavite, Batangas, Bataan and other parts of Quezon.

But the concentration of SO2 decreases farther out of the Taal caldera or lake area since it is “dispersed by winds at various levels,” Solidum said.