Number of areas under localized lockdown in Muntinlupa now at 7 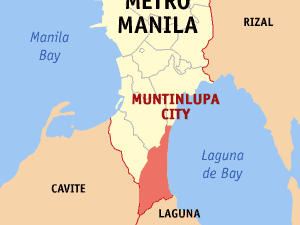 According to the Muntinlupa Public Information Office (PIO) in a statement, City Mayor Jaime Fresnedi placed five streets in Katarungan Village, Barangay Poblacion under ELCQ starting 12:00 p.m. of August 19 until 12:00 p.m. of September 2.

Muntinlupa City Health Office (CHO) chief Dr. Juancho Bagyi has said that, in the five streets of the city, COVID-19 cases are on the rise. Minimum public health protocols such as wearing of face mask and face shield outside of residence were also not observed.

Bunyi also noted that the said areas are comprised of high-risk groups such as senior citizens, children under 5 years old, and pregnant women.

Total lockdown protocols will be implemented in the community and residents will be prohibited to go out of their residences, except for emergencies.

Residents who are outside of the area starting the duration of the lockdown due to work will be permitted to return to their households but will be restricted from going out again.

A clustering of cases was also observed in the said community due to the presence of high risk groups in the area such as senior citizens, persons with disabilities, and children under five years old.

“The community is congested and units are close together, that’s why transmission is really high. If we allow the mobility of people in the building, the risk of transmission will be greatly enhanced,” Bunyi said in a statement.

He also noted that social distancing and the strict use of face masks are not strictly followed.

The Muntinlupa CHO is set to reinforce mass testing and contact tracing in the areas, while the City Social Service Department and Barangay will provide food packs and other basic items for the affected residents during the effectivity of the ELCQ.

Furthermore, the local government said the PNP Muntinlupa is set to secure the two communities and shall augment roving personnel in nearby areas to ensure the public’s strict compliance to health protocols.

Muntinlupa, along with other cities in Metro Manila are currently under enhanced community quarantine from August 6 to 20 due to the rising cases of the more transmissible Delta variant.