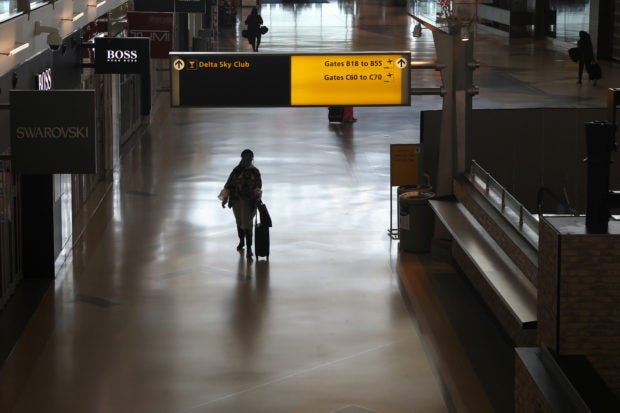 WASHINGTON — The U.S. Transportation Department on Wednesday said it will limit some flights from Chinese carriers to 40% passenger capacity for four weeks after the Chinese government imposed similar limits on four United Airlines flights.

China told United on Aug. 6 it was imposing sanctions after it alleged five passengers who traveled from San Francisco to Shanghai tested positive for COVID-19 on July 21.

The U.S. order said the department will limit over a four-week period each of four Chinese carriers to 40% capacity on a single China-U.S. flight.

United Airlines said it was “pleased to see this action by the (Transportation Department) in pursuit of fairness in this important market.”

The Chinese embassy in Washington did not immediately comment.

The U.S. government says China’s “circuit breaker” policy violates the nations’ air services agreement and “places undue culpability on carriers with respect to travelers that test positive for COVID-19 after their arrival in China.”

The department added carriers “have no means to independently verify positive test results alleged by Chinese authorities. Furthermore, there is no way to establish where or when a traveler may have contracted” the virus.

The limits were imposed on four Wednesday United San Francisco-Shanghai flights, beginning with an Aug. 11 flight.

The Biden administration said it will impose identical limits on four flights over four weeks – one each from Air China, China Eastern Airlines, China Southern Airlines Co and Xiamen Airlines.

The limits come as many Chinese students are headed to the United States for the start of fall classes.

Since the COVID-19 pandemic, China and the United States have sparred over air services.

In June 2020, the United States threatened to bar Chinese passenger flights after Beijing did not immediately agree to restore flights by U.S. airlines.

U.S. carriers voluntary halted flights to China after the coronavirus outbreak. Then-President Donald Trump on Jan. 31, 2020 barred nearly all non-U.S. citizens from traveling to the United States who had been in China within the last 14 days.

A long-standing air agreement between China and the United States allows both countries to operate more than 100 weekly flights between the two nations but only a fraction of those are currently operating.

Read Next
Pangilinan seeks probe into LTFRB’s flagged budget
EDITORS' PICK
Do all the things you do, faster
Motorcycles, smartphones, and cash prizes up for grabs in TNT’s ‘Tuloy Ang Saya’ Raffle in Mindanao
House energy committee chair Arroyo bats for cheap electricity
NCR at increased COVID risk again
New PS-DBM director says DepEd laptop MOA ‘not legal’
House okays budget; ways to go in Senate
MOST READ
Robredo’s tarpaulin portrait at Palace just a ‘placeholder’
Shopee PH gets flak for getting Toni Gonzaga
Robredo supporter tackles elephant in room: No massive fraud in 2022 polls, surveys were just right
DepEd: We are in a crisis situation in education sector
Don't miss out on the latest news and information.