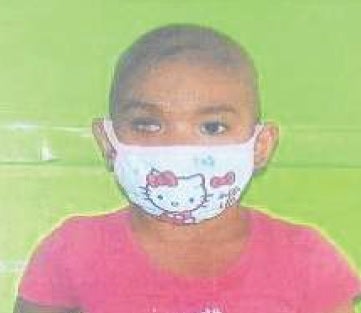 MANILA, Philippines — Princess Ihmet Cabana was only 3 when she lost her right eye to retinoblastoma (eye cancer) in October 2019. Four months earlier, her father James, a farmer in Alcala, Cagayan, noticed the redness in her affected eye and took her to a doctor.

“The doctor said Princess had a congenital cataract. He prescribed some eye drops but her eye became redder,” James said. Alarmed, the father and daughter went to Metro Manila to consult a doctor at East Avenue Medical Center in Quezon City.

The grim diagnosis came after several tests: the young girl had cancerous tumors in both eyes and her right eye could no longer be saved.

“We were referred to Philippine Children’s Medical Center (PCMC), where a doctor said Princess would have to undergo chemotherapy six times—three times before the eye removal surgery to shrink a tumor behind the eye, and the rest after the operation,” James said.

In January 2020, after Princess had completed her last chemotherapy session, the doctor said that to save her remaining eye that had five active tumors, she must undergo laser therapy and chemotherapy (melphalan injection) every month.

The cost of each monthly treatment is P47,770. To pay for this, James said he solicits donations from local officials and the provincial social welfare department. “Some of our relatives also help because we need at least P20,000 for our fare from Cagayan to Quezon City and other expenses every time we go to PCMC for Princess’ treatment,” he added.

But due to the lack of money and the lockdowns because of the pandemic, Princess was forced to skip treatment several times. Late last year, the doctor warned James that she should not miss any more sessions because more tumors had appeared in her remaining eye.

James, who had to pawn his parcel of land to raise money for Princess’ treatment, is the only breadwinner in their family of five. He makes a living by farming during the day and fishing at night in the Cagayan River.

His only consolation is that despite her illness, Princess is a happy, brave and lively girl who dreams of becoming a doctor one day. “My wife and I tell her that she needs to save her eye so that she can have a normal life when she grows up,” James said.