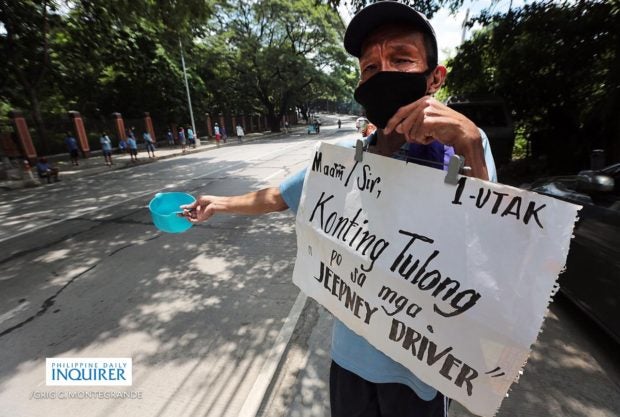 FILE – Traditional jeepney driver Samuel Narag, 56 years old, joins other drivers belonging to different JODA or association in begging for alms along C.P. Garcia Avenue in Diliman, Quezon City on Monday, June 22, due to lack of income for not being able to ply their routes for three months.-INQUIRER/GRIG C. MONTEGRANDE

MANILA, Philippines— Senator  Grace Poe is seeking a thorough investigation of and accountability from officials responsible for the “utterly dismal rollout” of the government’s service contracting program.

The program was supposed to provide a temporary livelihood to transportation workers hit by the pandemic but the  Commission on Audit’s latest report showed that only  P59.72 million or 1.07 percent of  the P5.58 billion budget had been utilized by the Land Transportation Franchising and Regulatory Board (LTFRB).

READ:DOTr also fails to fully use P 9.5-B aid funds

This prompted the head of the Senate committee on public services to push for the probe.

In a resolution,  Poe stressed:  “There is a need not only for a deeper probe but also the exaction of  accountability among the public officials who must be held liable for their gross mismanagement of funds meant to be provided as aid.”

According to the senator, it is “lamentable” that the government simply shrugged its “inability to disburse payments” to program beneficiaries.

(The slow release of payments  to operators and drivers who are  tirelessly ferrying  our frontliners days and night is unacceptable.)

“We can’t just sit and watch as our ‘kings of the road’ who have always rushed to the rescue of stranded commuters have now become beggars on the streets with no one to look after them,”  she added.

Aside from the slow rollout of the program,  the state auditor also flagged the LTFRB’s delay in distributing the one-time P6,500 cash subsidies for public utility vehicle drivers.

“Such lack of urgency in distributing aid in a time of widespread need and suffering is unconscionable and betrays a lack of compassion in the DOTR (Department of Transportation),” Poe said.  LTFRB is under the  DoTr.

She even recalled the experience of jeepney driver Alberto Manuel Jr. who turned to begging in the streets after losing his source of income due to the epidemic.

(It’s saddening and enraging to know that a person like him and other drivers in need should have been given assistance had the government done its job. Where’s the compassion? Where is  the justice?)

Saying that the pandemic “is far from over,”  the senator urged the government to “do their part in ensuring that funds are properly utilized for the benefit of the people.”