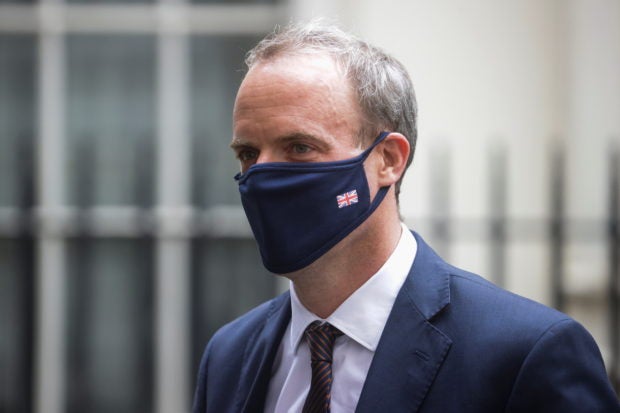 LONDON — Britain cautioned the Taliban on Tuesday that Afghanistan must never be used to launch terror attacks but added that the West must try to positively influence the insurgents who have grabbed power after the United States withdrew its forces.

Britain fears the Taliban’s return and the vacuum left by the West’s chaotic withdrawal will allow militants from al Qaeda and Islamic State to gain a foothold in Afghanistan, just 20 years after the Sept. 11, 2001 attacks on the United States.

Foreign Secretary Dominic Raab said the West would have to be pragmatic in its relations with the Taliban, try to see if it could moderate the new rulers of Afghanistan and even try to convince them to be “inclusive”.

“Our message is going to be this: Afghanistan must never be used to launch terrorist attacks against the West, we’ve had 20 years of success in that regard,” Raab told Sky.

“We want to do everything we can, through the full range of diplomatic-economic sanction measures, to make sure we can use as much leverage as we conceivably have, and I’m realistic about that, to try and moderate and exercise some form of positive influence around the regime,” he said.

Told by a Sky reporter that the Taliban were a “red tag bunch of thugs”, Raab said: “I’m not going to dissent from that view but they are now in power, and we now need to deal with that reality.”

“We want to test whether there is scope to moderate the kind of regime that we will now see in place,” Raab said.

Raab said the position at Kabul airport was stabilising.

Asked by the BBC if he could see himself sitting down with the Taliban, Raab said: “No, not for the foreseeable future, but we’ve always had dialogue of some sort.”

Meanwhile, Britain’s Prince Harry, who served two tours of duty in Afghanistan and founded the Invictus Games sporting event for wounded former military personnel, encouraged veterans from the conflict to offer support for each other.

“What’s happening in Afghanistan resonates across the international Invictus community,” Queen Elizabeth’s 36-year-old grandson, who the Taliban had vowed to kidnap or kill during his second tour, said in a statement with other organisers of the Games.

“We encourage everybody across the Invictus network – and the wider military community – to reach out to each other and offer support for one another.”