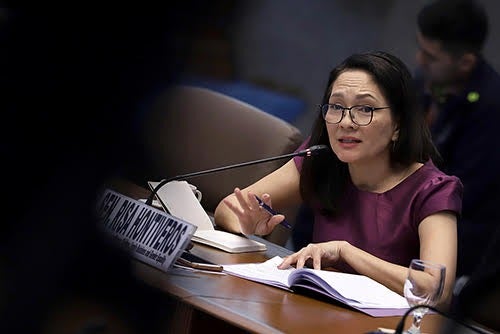 Senator Risa Hontiveros during one of the hearings at the Senate. Senate PRIB file photo / Joseph Vidal

MANILA, Philippines—When government officials took their oath in office, they are expected to live a “modest lifestyle.”

So said opposition Senator Risa Hontiveros when asked on Tuesday about the reported “lavish” wedding ceremony of a drivers party-list representative, Claudine Bautista, in Balesin Island Resort in Polilio, Quezon.

Bautista drew flak after some photos of their wedding were posted on Instagram by fashion designer Michael Cinco last August 11.

And Hontiveros understands why many people find this a “sensitive issue” especially at this time of pandemic when many people, including public utility vehicle (PUV) drivers, are struggling to find food for their table.

(And over all, for me the most important order to all of us working in government is to have a modest lifestyle. Officials and employees of government are being encouraged to live within our means, to live modestly.)

(As an activist, I can say that we have been taught to live simply as a way to sympathize with most of our poor countrymen, whose situation got worse amid the pandemic.)

(So I understand why this is a sensitive issue to our countrymen and for me, this is also a lesson to all of us working in government especially at this worst time.)

Hontiveros noted that one of the hardest-hit by the pandemic is the transportation sector as many PUV drivers have been displaced due to health restrictions being imposed by the government.

They have been calling for more cash aid while urging government to extend its service contracting program to displaced PUV drivers, according to the senator.

(I hope we can give attention to these legislative agenda, which have long been raised by the drivers even before the pandemic, as this is very important to the transport sector as well as the service subsector and the logistics subsector.)