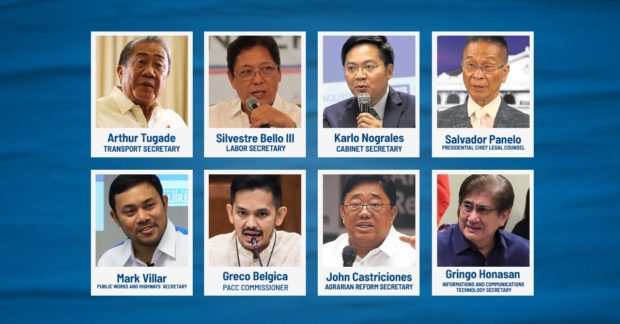 MANILA, Philippines — The Partido Demokratiko Pilipino-Lakas ng Bayan (PDP-Laban) has named at least six Cabinet members it is considering to include in its senatorial lineup in the 2022 national elections.

PDP-Laban Secretary General Melvin Matibag on Tuesday said the party is currently vetting the names of at least 20 potential candidates, naming a few including:

Aside from the Cabinet members, the party is also considering Quirino governor Dax Cua and congresswoman Lucy Torres.

Matibag said it is looking to finalize the list by Sept. 8.

He said it might field eight or nine candidates from PDP-Laban and the rest will be from parties allied with the administration.

In choosing the PDP-Laban’s senatorial slate, Matibag said they are looking at the winnability of the possible bets.

“We are looking at the capacity to win. ‘Yung competency madali na lang in a sense na kaya nila ang trabaho na ‘yan. Ang tinitingnan natin dito ay ang winnability and also the track record and, of course, the relationship to the administration,” he said in an online press briefing.

The national council of PDP-Laban had nominated Senator Bong Go and President Rodrigo Duterte to be its standard-bearers in the 2022 elections.