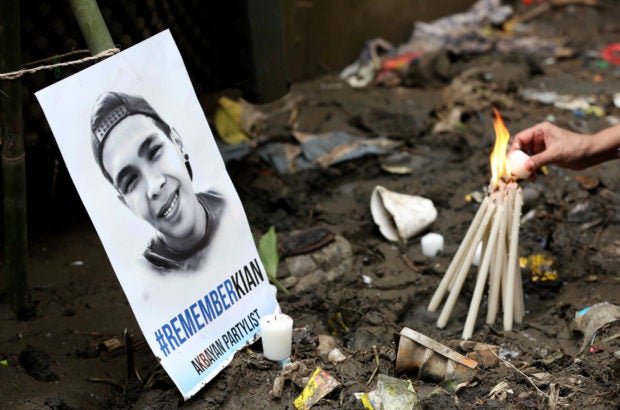 REMEMBERING KIAN In this file photo, residents in Kian delos Santos’ neighborhood in Caloocan City light candles at the place where the 17-year-old was killed by policemen on Aug. 16, 2017. Delos Santos’ family and relatives of drug war victims reiterated their call for justice as they marked his fourth death anniversary on Monday. —LYN RILLON

MANILA, Philippines — Four years since the death of 17-year-old Kian delos Santos, the families of other victims of President Rodrigo Duterte’s drug war expressed hope that the International Criminal Court (ICC) would mete the justice which they have been seeking on enforcers of the controversial anti-drug campaign.

Delos Santos’ Aug. 16, 2017, murder in the hands of Caloocan police was seen by many as being emblematic of the alleged crimes committed on behalf of Mr. Duterte’s drug war. Police claimed the Grade 11 student resisted arrest and opened fire at them when he was apprehended, but closed-circuit television camera footage showed lawmen dragging Delos Santos before he was shot while on his knees.

On Monday, families under the movement Rise Up for Life and for Rights, together with their counsel from the National Union of Peoples’ Lawyers (NUPL), again pressed the international body to prosecute Mr. Duterte for leading the antidrug campaign which has killed thousands of poor Filipinos.

“We now have a glimpse of the light after a long time,” Llore Pasco, whose sons Juan Carlos and Crisanto Lozano were killed in 2017 by police, said in Filipino. “We are not afraid because the time has finally come [for Mr. Duterte. We] know the fight is still ahead of us, but we want to see it through to the end to attain justice not just for ourselves but for all victims of extrajudicial killings (EJKs).”

Pasco was among the petitioners who led the filing of communiques with the ICC accusing Mr. Duterte of crimes against humanity. The communiques later prompted outgoing ICC Prosecutor Fatou Bensouda to seek a formal investigation by the court into the Philippine drug war.

For NUPL president Neri Colmenares, an arrest warrant served on Mr. Duterte would not only bring justice to victims of the drug war but also affect public perception of the President, who is considering running for vice president although that position does not give him immunity from suit.

“If the ICC ever issues a warrant of arrest against him, it would have an impact on his credibility in the elections. After all, why would you bet on a candidate who, even if he wins, might be removed from office because he would be arrested or he couldn’t travel anywhere?” Colmenares said.

On Aug. 13, the ICC concluded its two-month representation process through which families of EJK victims could file representation stating they want a full investigation of the charge of crimes against humanity involving murder against Mr. Duterte.

While lawyers could not disclose the exact number of representations filed since June, Colmenares said there were “more families than the original seven” who came forward.

“President Duterte is not an easy foe to be up against,” the former party list lawmaker said. “But we’ve taken all the steps necessary to ensure the security and identity of the victims.”

Lawyer Kristina Conti, also of NUPL, said “Majority want Mr. Duterte investigated. They say Mr. Duterte is the one at fault, that he is at the root of all these. [Even] the mothers whose loved ones were killed by vigilantes or were found dead … [point] to Mr. Duterte as the [main culprit].”

Malacañang belittles the case being prepared against Mr. Duterte in the ICC and maintains that legal mechanisms are in place. However, in the past five years, only the three policemen involved in Delos Santos’ death have been sent to jail in what was the first and so far only conviction in Mr. Duterte’s drug war.

Meanwhile, the Department of Justice (DOJ) has finished its audit of Philippine National Police case files of antidrug operations which led to the killing of drug suspects, Justice Secretary Menardo Guevarra said on Monday.

“It’s done. I’m just going over it. We’ll discuss it with the PNP,” Guevarra said, referring to 52 case files with the common narrative of drug suspects killed after allegedly resisting arrest (“nanlaban”).

But Guevarra did not give details on the results of the review, saying that “All these matters will be discussed by [a] review panel. If criminal investigation is warranted, witnesses including family members will be sought and called upon to provide information.”

—WITH REPORTS FROM TINA G. SANTOS AND INQUIRER RESEARCH INQ