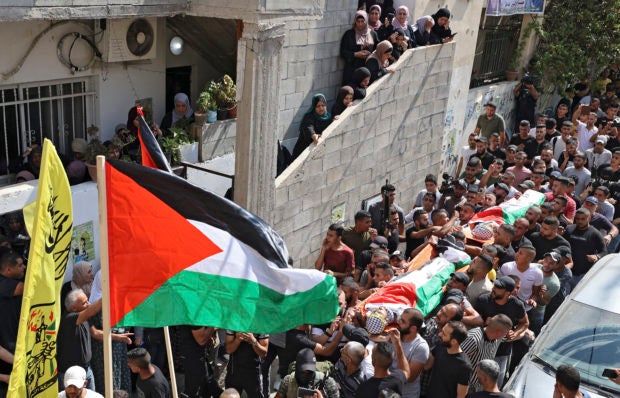 Palestinian mourners carry the body of Raed Abu Seif and Saleh Ammar (R), two of four Palestinians killed in clashes with Israeli security forces earlier in the day, during their funeral in the Jenin refugee camp in the north of the occupied West Bank on August 16, 2021. AFP

JENIN, Palestinian Territories — Four Palestinians were killed on Monday in clashes with Israeli security forces at Jenin refugee camp in the occupied West Bank, where violence has escalated over a wildcat Jewish settlement.

The Israel Border Police, which operates in the West Bank, said its forces came under fire during a search for a Palestinian suspected of involvement in alleged “terrorist” activities.

“Heavy gunfire was opened at a short range by a large number” of people, said a spokesman for the Israel Border Police.

“The border police force fired back at the terrorists and neutralised them. There were no victims among our ranks,” he said.

Deadly clashes have been frequent in Jenin and the flashpoint West Bank town of Beita since May, when dozens of Israeli families arrived and began constructing the wildcat settlement of Eviatar.

The latest lives lost were four Palestinians killed by “Israeli gunfire”, according to the Palestinian health ministry.

It identified them as Raed Abu Seif, 21, and Saleh Ammar, 19, as well as Amjad Husseiniyah and Nureddin Jarrar.

An AFP journalist saw the bodies of Abu Seif and Ammar at the Jenin hospital morgue, where the Palestinian health ministry said Israeli forces had also taken the bodies of two other Palestinians.

The Israeli side confirmed it was holding the bodies of two Palestinians.

The Palestinian presidency condemned a “heinous crime” and held the Jewish state “responsible for the escalation and its repercussions”.

“The continuation of the Israeli policy will lead to an explosion of the situation, increased tensions and instability,” presidential spokesman Nabil Abu Rudeina warned in a statement.

The official Palestinian news agency Wafa said two of the Palestinians killed had been living in Jenin refugee camp, a hot spot during the two Palestinian intifadas, or uprisings, against Israel in 1987-1993 and 2000-2005.

The two others, Abu Seif and Jarrar, were originally from the city of Jenin.

In recent weeks there have been numerous clashes between Israeli forces and Palestinians in the northern occupied West Bank, mainly in Jenin and Beita.

The inhabitants of Beita have held a number of demonstrations in recent weeks against the Israeli occupation and the settlement expansion, triggering violent confrontations.

The clashes with the Israeli security forces have claimed the lives of several Palestinians and left hundreds more injured.

Beita residents have been demonstrating since May against the Eviatar settlement set up nearby without official permission from Israeli authorities.

The settlement was evacuated in early July but Israeli army troops remain stationed there while authorities deliberate on its fate.

If the settlement is approved, its founders will be allowed to take up residence there more permanently.

Beita’s residents have vowed to continue their campaign until the army also leaves the outpost.

Israel occupied the West Bank during the 1967 Six-Day War and all Jewish settlements there are considered illegal by most of the international community.

Almost half a million people live in Israeli settlements in the West Bank, alongside 2.8 million Palestinians.