OFWs are back home, what now? 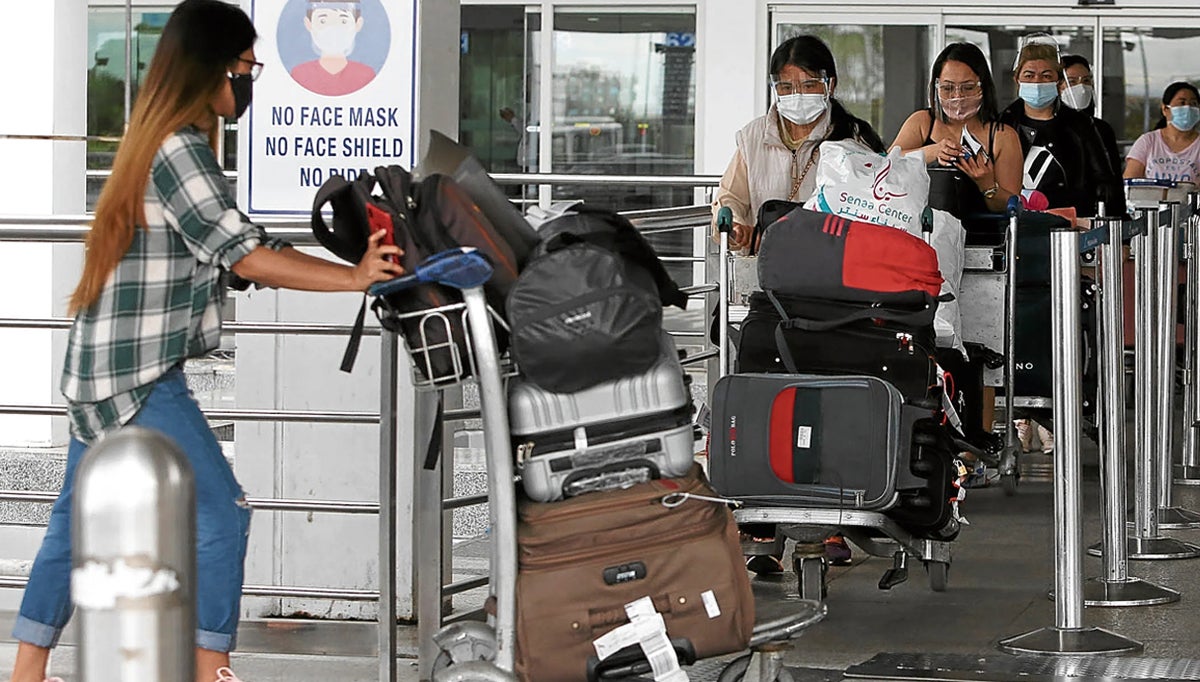 MANILA, Philippines—The COVID-19 pandemic has hit, not only Filipinos working in the country, but also Filipinos pursuing career opportunities overseas.

Data from government agencies showed that more than a million Filipinos had already been sent or returned home for various reasons, but mainly because of the pandemic.

However, aside from the growing number of repatriated overseas Filipino workers (OFWs), a key question is begging to be answered—What will happen now to those already home?

According to Sen. Joel Villanueva, chair of the Senate Committee on Labor, a major concern about repatriated Filipinos is that there could be no jobs for them in the Philippines and the country’s unemployment rate could soar as a result amid the pandemic.

“The last thing that we want to happen, amid the current situation, is for the OFWs to be among the unemployed citizens in the country,” Villanueva said in Filipino at an online radio interview over DZMM last Aug. 12.

To help address the issue, Villanueva suggested the conduct of a general and unified inventory of the skills of repatriated OFWs.

“To begin with, the DOLE (Department of Labor and Employment) and OWWA (Overseas Workers Welfare Administration) should account for all of the repatriated OFWs and create an inventory,” the senator said.

“We should have an inventory where we can match their skills and competencies to available talent and jobs. In this reintegration, we can check their skills and which jobs are fit for them,” he added.

Apart from the senator’s suggestion, government agencies have several programs which could help repatriated Filipinos.

Among the agency’s programs for on-site reintegration preparedness included:

Some of the programs for in-country reintegration are:

The DOLE also offers a psycho-social program as part of its reintegration services. 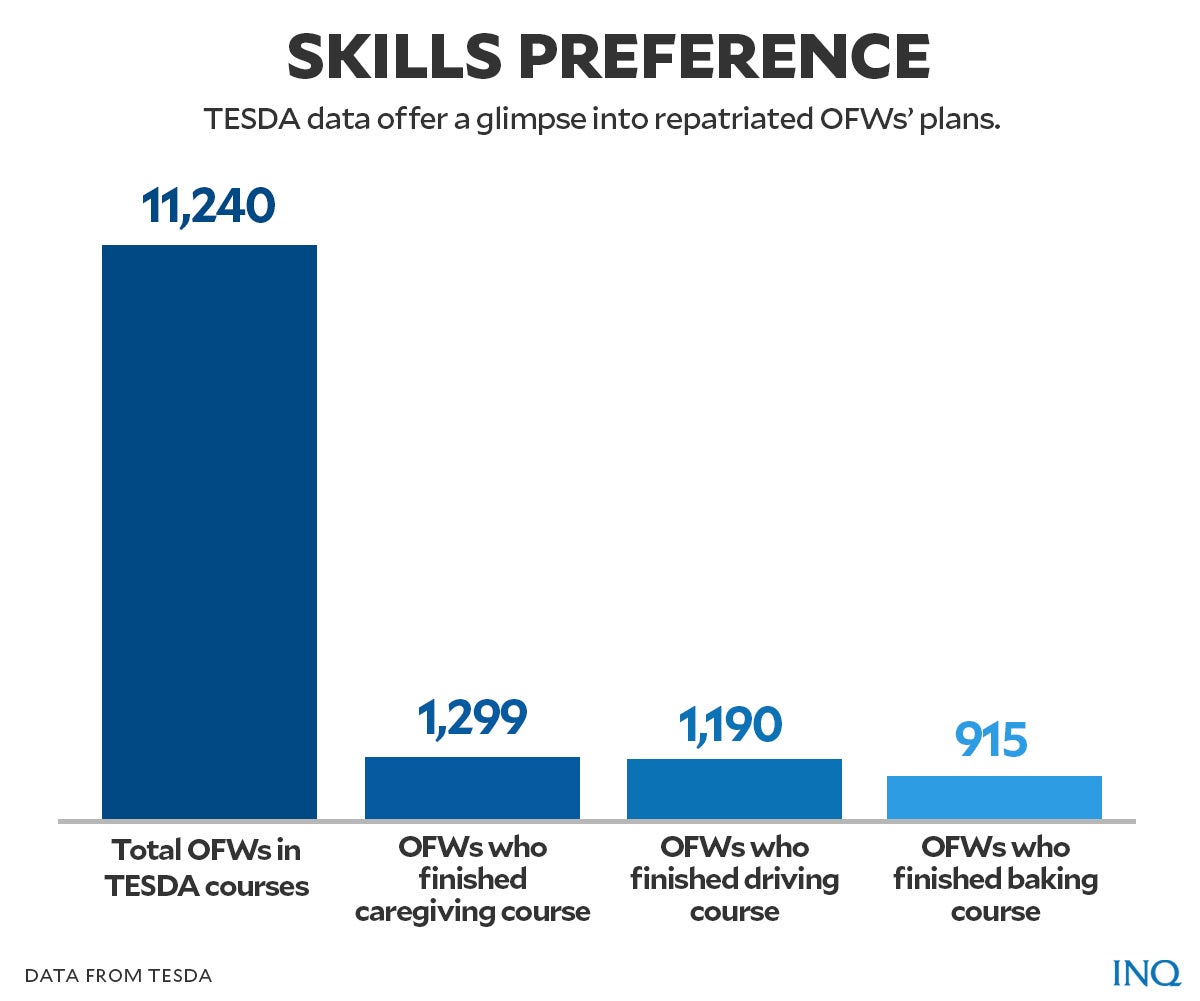 According to a report submitted by the Philippines to voluntarily comply with the Global Compact for Safe, Orderly and Regular Migration (GCM) review of the United Nations Economic and Social Commission for Asia and the Pacific, the government has integrated mechanisms to synchronize and streamline repatriation and integration of OFWS.

One of these was the Comprehensive OFW Reintegration Program (CORP), a flagship program of OWWA and the National Reintegration Center For OFWs (NCRO).

The review said the program was meant to “strengthen and harmonize the reintegration programs and services provided by various stakeholders.”

“Since its approval, OWWA has been working for its full rollout,” the review submitted to the UN agency said.

DOLE, in a statement, said its reintegration services “is a package of interventions and mechanisms developed and implemented with social partners to facilitate the productive return of the OFWs to their families and communities upon their completion of overseas employment.”

Jobs are also being made available for returning OFWs.

OFW teachers who are returning to the Philippines are being offered entry-level teaching positions by the Department of Education (DepEd) through a program called “Sa Pinas Ikaw ang Ma’am, Sir.”

According to data from the Department of Foreign Affairs (DFA), a total of 1,106 teaching positions had already been filled by OFWs in the last three years.

One of these programs was the Agri-Negosyo Para sa OFWs launched last May, which aims to help repatriated OFWs to venture into agribusiness.

It was initially introduced in the regions of Calabarzon, Western Visayas, NCR, Central Luzon and Central Visayas—where provinces with the most repatriated OFWs are located.

The program, said TESDA in a statement, “is a one-stop shop of information for OFWS.”

A program, called “TESDA Abot Lahat ang OFWS”, was launched in June 2020 to help provide new skills to OFWs displaced from their jobs by the pandemic.

According to TESDA, most OFWs prefer to take caregiving courses. Data as of July 17 showed that around 1,299 repatriated OFWs have finished training in caregiving, or 11.56 percent of the total 11,240 OFWs who trained with TESDA in 2021.

This was followed by driving courses with 1,190 graduates, or 10.59 percent, recorded as of June. Meanwhile, courses for bread and pastry making had 915 graduates.

TESDA said most of the graduates were from Western Visayas (1,021), Central Visayas (595) and Zamboanga Peninsula (470).

TESDA also offers another project, called the “OFW Reintegration through Skills and Entrepreneurship” or the OFW RISE program.

It is a four-hour online course which aims to arm OFWs with knowledge on basic entrepreneurship that could help them bring their business ideas to reality.

A program, called “Balik Pinas, Balik Hanapbuhay,” is a livelihood support plan that seeks to provide “immediate relief” to repatriated OFWs. Though this, OFWs are given P20,000 each as startup or additional capital for livelihood projects. 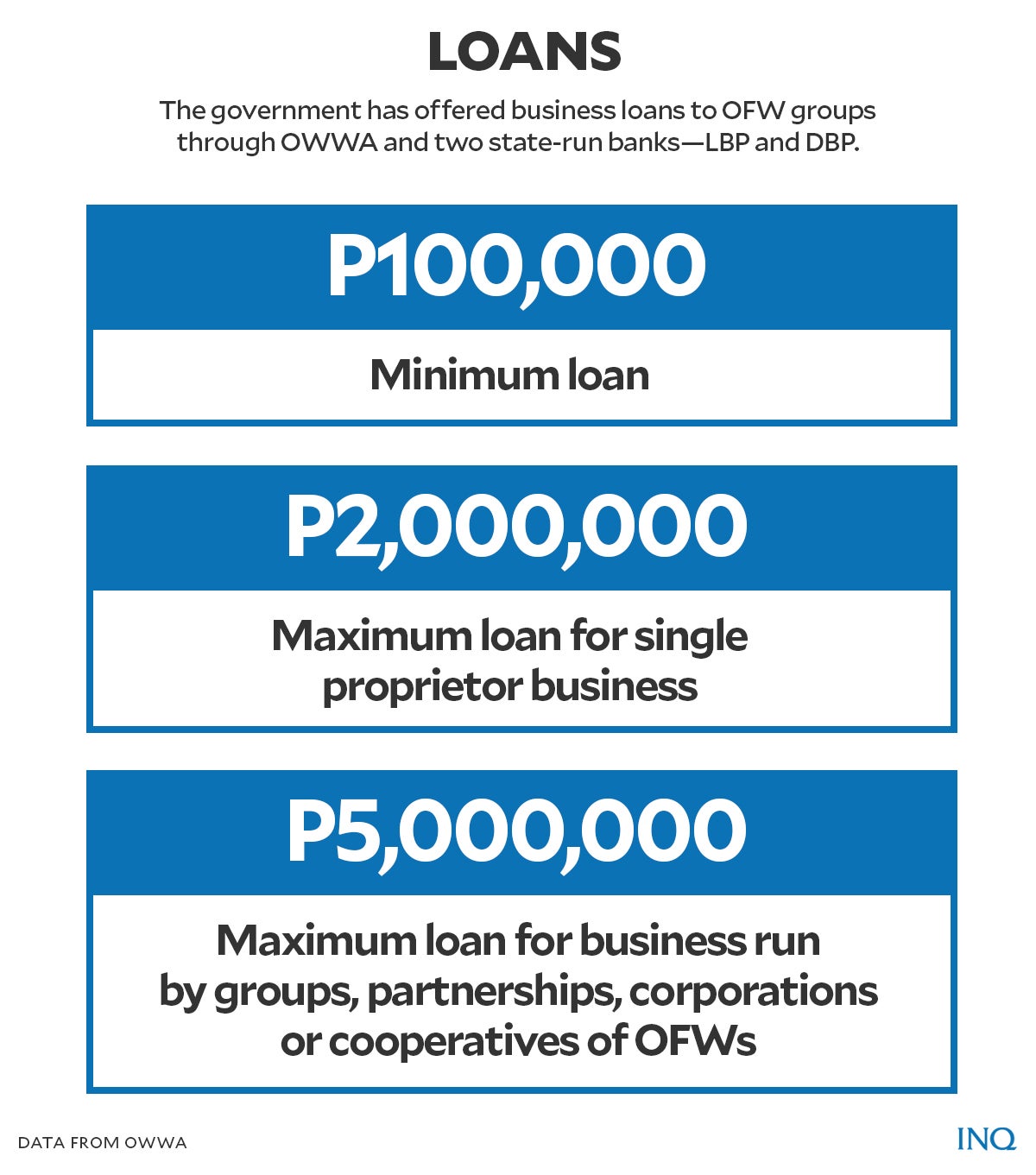 According to OWWA and LBP, the program offers a minimum loanable amount of P100,000 with the following loan ceilings:

It has an interest rate of 7.5% per annum fixed for the duration of the loan for short-term and long-term loans.

According to a study by the UN International Organization for Migration (IOM), an “alarming” 83 percent of the repatriated OFWs remained unemployed “three months after their return.”

“This came at a time whereby joblessness in the Philippines hit a record-high of 10.3 percent for 2020 as a direct result of COVID-19 and the associated lockdowns,” the IOM report stated.

At least 48 percent also said they suffered a 60 percent drop in income after their return to the Philippines. Unfortunately, around 17 percent said they did not receive their salary before their return.

Options are there but…

While there are skills programs for repatriated OFWs, according to Villanueva, most prefer not to undergo training programs and try to go back abroad and work.

“In my experience when I was in TESDA, around 95 percent of OFWs would say no to [skills] programs because they want to find work abroad,” said Villanueva.

“Unfortunately, we really need to train them and give them [new skills] if they lack skills and competencies to be employed again overseas,” he added.

According to IOM, 48 percent of the total 8,332 OFWs it surveyed said they plan to return abroad in the future.

“But we really can’t blame that they want to go back abroad because [they have questions such as] ‘what are we going to do here if we will train?, ‘do we have allowance;’ ‘will we be able to sustain [the needs of my family]?’,” Villanueva said.

What about the budget?

Another issue faced by the government in reintegrating repatriated OFWs is funding for services and financial support programs. 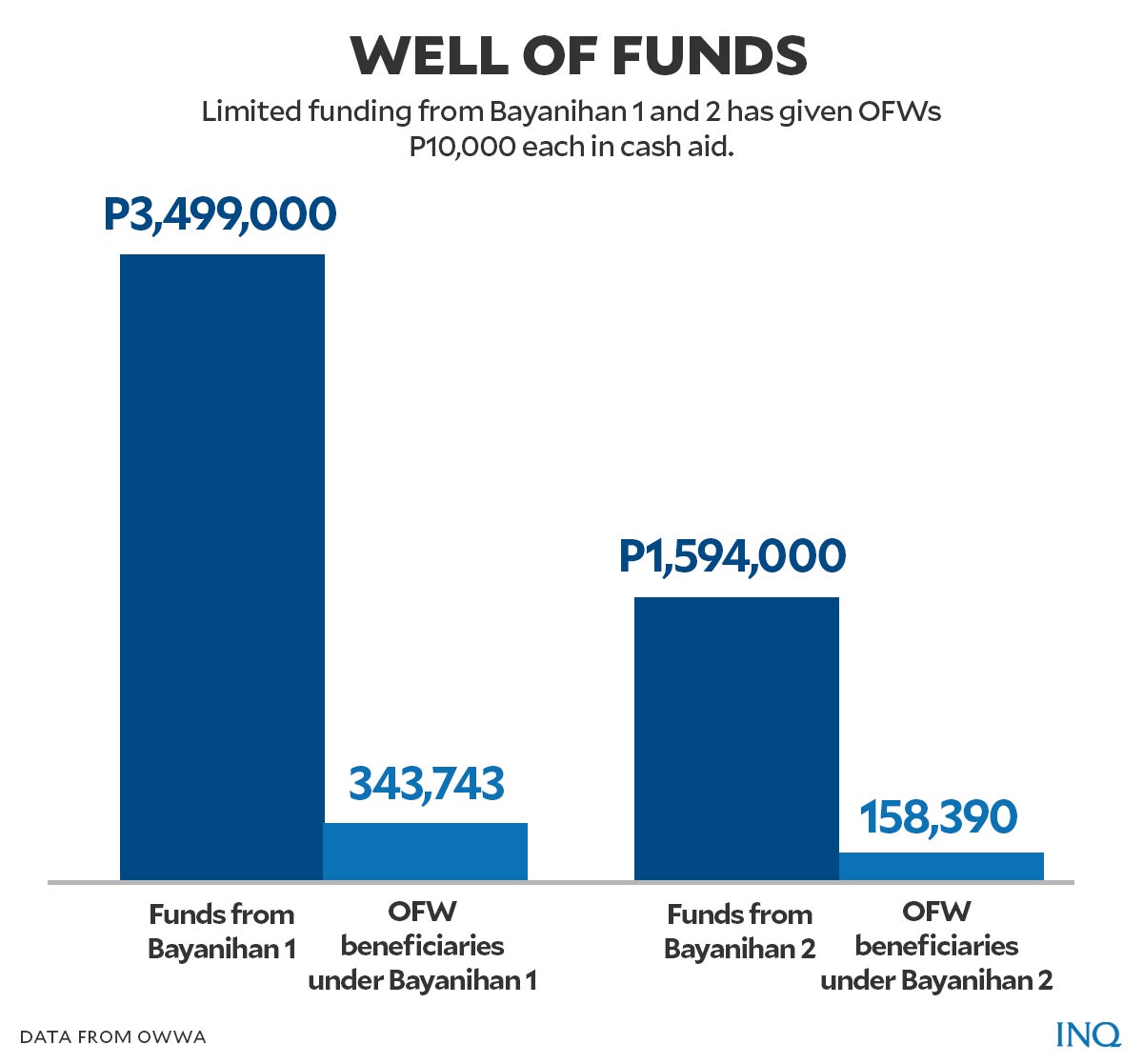 However, according to OWWA administrator Hans Leo Cacdac, the cash assistance program has been suspended until the passage of the proposed Bayanihan 3 law.

So far, P5.2 billion has been released for the AKAP program to aid at least 520,000 OFW beneficiaries. Cacdac recently said at an online briefing that the current supplemental funds may be good until mid-September.

Still, OWWA is requesting for an additional P7.5 billion to fund OFWs who are set to be repatriated by the end of the year. The tasks are growing by the day.