Rangers’ lament: ‘We take care of environment, then they shoot us’ | Inquirer News

Rangers’ lament: ‘We take care of environment, then they shoot us’ 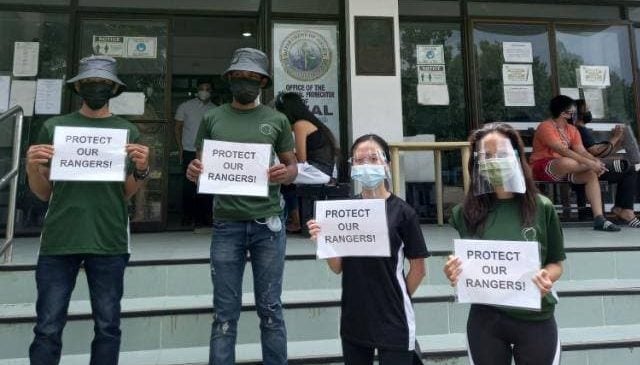 TAKING THE FIGHT TO COURT Forest rangers Khukan Maas and Melvin Akhmad, together with their supporters, go to the Rizal prosecutor’s office on Friday to pursue a case against groups that they said are out to kill them. —PHOTO COURTESY OF MASUNGI GEORESERVE FOUNDATION

MANILA, Philippines — The wounds of Khukan Maas and Melvin Akhmad were still covered in bandages when they filed frustrated murder charges on Friday against nine suspects who allegedly fired at the two forest rangers employed by the Masungi Georeserve Foundation on the night of July 24.

By taking legal action at the Rizal provincial prosecutor’s office, the rangers who guard a reforestation site in the Upper Marikina River Basin Protected Landscape said they were fighting back against groups that had threatened to kill them and their families.

Maas, who has been working as a forest ranger for more than a decade, said he couldn’t help but be enraged and seek redress for what happened “considering the difficulty of our work and to think we were doing no harm and only safeguarding government property.”

“We take care of the environment, then they shoot us,” he said.

Maas and Akhmad were at the Bayog Ranger Station inside the protected area on the night of the shooting. According to Ann Dumaliang, a trustee of the foundation, their attackers wielded shotguns and fired at the station at least 12 times.

Maas was hit in the neck while a bullet grazed Akhmad’s head, according to staff members of the foundation who brought them to a hospital in Quezon City.

“We’re so grateful for their fighting spirit, especially the rest of the rangers who are working alongside us. When I asked them how they were feeling after the attack, they said ‘No surrender,’” Dumaliang told the Inquirer on Saturday.

The foundation is a partner of the Department of Environment and Natural Resources in the Masungi reforestation initiative, where rangers keep watch over a 2,000-hectare area, protecting it from encroachment by business interests, big or small.

Dumaliang said the foundation has identified at least two groups who had been threatening the rangers since March.

The Department of the Interior and Local Government (DILG) has also been going after these groups. On July 12, the agency recommended the filing of charges against the group led by Jay Sambilay and another led by Arnel Olitoquit for illegal encroachment and “other environmental crimes.” A month earlier, the DILG ordered the resort closed.

According to Dumaliang, the Olitoquit group was found to have been building a resort inside the Upper Marikina protected area, complete with swimming pools and other facilities.

Sambilay and his men have also been building a resort, according to forest rangers who encountered them in March.

Dumaliang said the harassment did not stop with the July 24 shooting. Days after the attack, she said, the foundation’s staff members noticed men in cars tailing them on the road and taking pictures.

“We have taken note of more than seven instances when the rangers received death threats. Even their loved ones were not spared,’’ Dumaliang said.

The source of these threats would tell them that ‘’we know where you live, anyway,’’ she said. “’If we can’t go after you, we can go after your family.’”

According to Dumaliang, Philippine National Police chief Gen. Guillermo Eleazar had promised to post more law enforcers in the area as added deterrent.

Still, she said, the general feeling was that with their harassers still at large, “we are on our own, vulnerable and left to our own devices … The situation could worsen.”