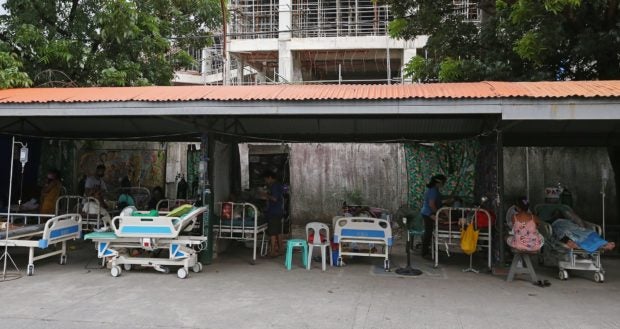 MAKESHIFT RECEPTION AREA: Suspected COVID-19 patients are made to stay at the parking space outside Ospital ng Biñan in Laguna province on Saturday. One of them died in the afternoon. (Photo by RICHARD A. REYES / Philippine Daily Inquirer)

MANILA, Philippines — The independent pandemic monitor OCTA Research on Saturday said the growing number of COVID-19 infections not just in Metro Manila but in other parts of the country could mean that the strict lockdown was not working or that the new Delta coronavirus variant was more aggressive than expected.

The Department of Health (DOH) on Saturday recorded 14,249 new cases, topping the previous day’s 13,777. Saturday’s figure was the second highest number of infections logged in a single day since 15,310 were recorded on April 2, during the surge.

The OCTA group said the reproduction rate (R) in Metro Manila, which is under enhanced community quarantine (ECQ), the most stringent lockdown, increased to 1.85 on Saturday from 1.78 just two days earlier.

Nationwide, it was a high 1.45, the group said in its latest monitoring report.

The reproduction rate measures how fast the virus spreads. A reproduction number of 1 or higher indicates sustained transmission of the virus.

OCTA research fellow Guido David said the rising reproduction numbers were not what the group had expected to happen after a week of ECQ.

“We expected R to decrease almost immediately after the start of ECQ. This happened last March and August 2020,” he said on Twitter.

“Either the restrictions are not sufficient—too many people still going about—or the Delta variant is proving to be much harder to stop,” he said.

OCTA also reported that in Metro Manila, the positivity rate was 19 percent, meaning nearly one in every five people tested was positive for SARS-CoV-2, the virus that causes the severe respiratory disease.

The DOH on Saturday said the positivity rate in the country continued to climb, with 24.9 percent testing positive.

This means nearly one in four individuals tested had the virus. According to the World Health Organization, the positivity rate needs to be 5 percent or lower for viral transmission to be considered contained.

Hospitals are also filling up, with the surge fueled in part by the more transmissible Delta variant.

Death in the parking lot

The high occupancy rate was seen at Ospital ng Biñan in Laguna province where a man died on Saturday afternoon in the hospital’s parking lot, which was converted recently into a makeshift reception area for patients suspected to be afflicted with COVID-19.

The man, possibly in his late 20s, was one of 18 patients lying on hospital beds and breathing from oxygen tanks under a covered walkway.

Reyes was told by the hospital staff that patients brought to the parking lot either had not been swabbed or had not yet received their swab test results.

According to medical workers, family members brought the man there earlier that day, coughing excessively and having breathing difficulties after being sick at home for about two weeks.

Reyes also said there were 15 COVID-19 patients in a nearby isolation tent.

He was told that the three-floor hospital did not have an ICU.

The man’s death came as Malacañang announced the extension of the ECQ in Laguna to Aug. 20.

Until the new Palace announcement, the ECQ in Laguna was to end on Sunday and then deescalated to modified ECQ until Aug. 31.

OCTA also noted a rise in the average daily attack rate (Adar), which is the number of new daily cases per 100,000 population. An Adar higher than 10 is considered high-risk, while an Adar over 25 is considered critical.

Based on its report, 13 areas are critical. On top of its list was Navotas City, which had the highest Adar in the country of 47.67, followed by Tuguegarao City with 47.39 and Mariveles with 45.

The majority of them, or 95.9 percent, are mild cases, the DOH said. Of the remainder, 1 percent are asymptomatic, 0.8 percent critical, 1.4 percent severe and 0.95 percent moderate.

—WITH A REPORT FROM CHRISTINE O. AVENDAÑO