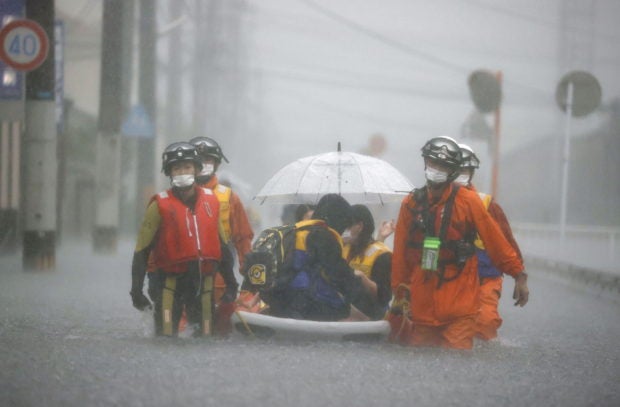 Firefighters transport stranded residents on a boat in a road flooded by heavy rain in Kurume, Fukuoka prefecture, western Japan, August 14, 2021, in this photo taken by Kyodo. (Kyodo/via REUTERS)

TOKYO  – One woman was dead and two other people were missing on Saturday after torrential rains touched off a landslide and engulfed two houses in Nagasaki prefecture in western Japan.

With some parts of the country experiencing record levels of rainfall, Japan has broadened its highest level of risk alerts to cover more than 1 million people. One area recorded 408 mm (15.7 inches) of rain in the 72 hours to Saturday morning.

Rivers overflowed in some areas of Hiroshima prefecture and were dangerously high in other parts of western Japan, television footage showed.

The Kamo River running through the heart of the ancient capital of Kyoto was high but not flooding as of midday on Saturday.

Heavy rains have now moved into the central part of the main island of Honshu. The Japan Meteorological Agency has warned that a rain front is likely to remain over the nation for about a week.