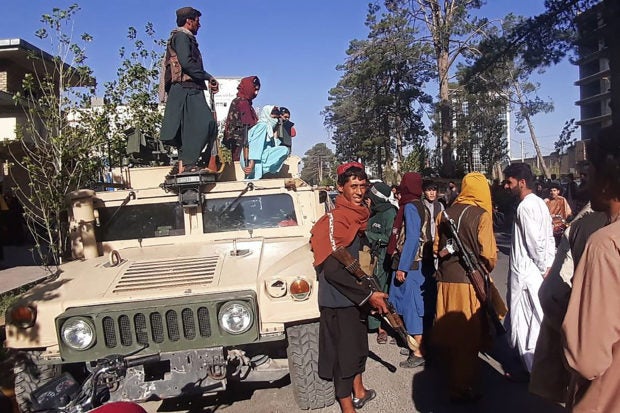 In this picture taken on August 13, 2021, Taliban fighters stand guard along the roadside in Herat, Afghanistan’s third biggest city, after government forces pulled out the day before following weeks of being under siege. (Photo by AFP)

MADRID, Spain — Spain announced Friday it had begun to repatriate its few citizens left in Afghanistan as well as personnel from its embassy in Kabul and Afghan colleagues amid the Taliban’s lightning advance across the country.

Foreign Minister Jose Manuel Albares signalled “the start of repatriation of embassy personnel, Spaniards who remained in the country as well as Afghans and their families who worked at our side,” according to a statement.

“Spain is ready for any eventuality, including that of emptying the embassy if necessary,” the foreign minister said.

Apart from those in the embassy, there remained six Spanish citizens in Afghanistan on Friday, the ministry said.

The ministry is working with other ministries “to coordinate the transfer of Afghan citizens who collaborated in military missions and Spanish cooperation projects in Afghanistan,” the statement said.

Since 2014, Spain has granted refugee status to 55 Afghan translators and their relatives, according to the interior ministry.

The interior ministry will “process” any application for international protection made by Afghan translators and others who worked for Spanish forces after they arrive in Spain, an interior ministry source told AFP.

A defence ministry source told AFP that Madrid “is working on the possibility of bringing the translators and other people who worked with Spanish forces” in Afghanistan to Spain, but did not specify a timeline.

Spain pulled its last troops out of Afghanistan in May 2021 after a mission which lasted nearly two decades in which about 100 Spanish soldiers lost their lives.

The United States and other countries like the United Kingdom, Norway, and Denmark have announced plans to evacuate embassy personnel and citizens from Afghanistan.