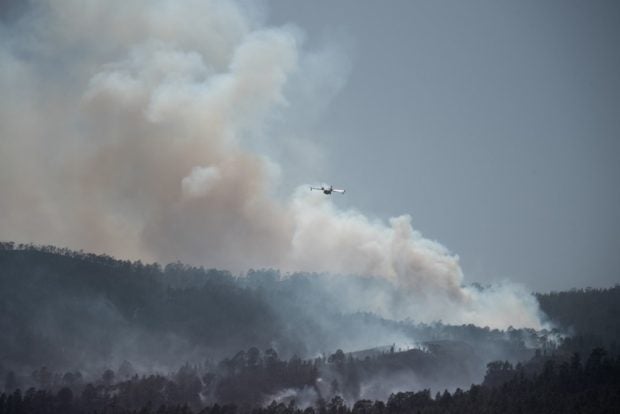 A Canadair flies over a wildfire in Arico, five kilometers from the Teide National Park on the Canary Island of Tenerife, May 20, 2021. (Photo by DESIREE MARTIN / AFP)

MADRID — Spain and Portugal were on alert for wildfires on Thursday as a heatwave that has enveloped southeastern Europe in recent days shifted west towards the two nations.

Temperatures were forecast to reach highs of around 40 degrees Celsius (104 degrees Fahrenheit) in much of the Iberian peninsula in the coming days and could hit the mid-40s in some areas of southern Spain.

A heatwave fed by hot air from North Africa has engulfed large parts of the Mediterranean region in recent days, contributing to massive wildfires and killing dozens of people in Italy, Turkey, and Algeria.

“In Spain, we are not exempt from this danger,” Spanish Prime Minister Pedro Sanchez warned on Wednesday as the heatwave took hold.

“I ask that everyone take maximum care and cooperate with the authorities to minimize the risk (of wildfires) as much as possible.”

All but three of Spain’s 17 regions were on alert for heat while Portugal’s weather office warned that the center and north of the country as well as parts of the southern Algarve province were on “maximum” alert for wildfires.

In 2017, fires killed dozens of people in Portugal.

Spain’s northeastern Catalonia region on Thursday banned camping in forests and sporting activities in rural areas to reduce the risk of wildfires.

It also prohibited the use of some farm equipment during the hours of the most heat.

The number of heatwaves registered in Spain between 2011 and 2020 is double the number recorded in each of the three previous decades, he told AFP.