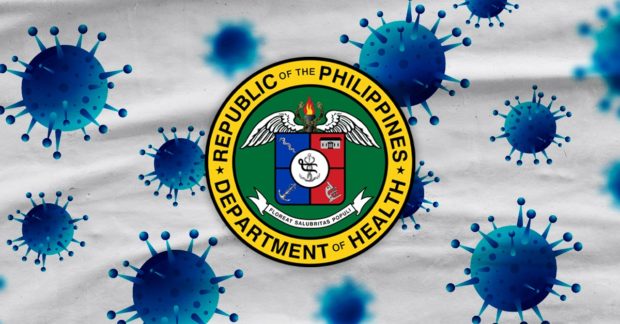 FILE Logo of the Department of Health over a graphic representation of the SARS-COV 2, which causes coronavirus disease.

MANILA, Philippines — At least two senators are seeking a Senate probe into the Department of Health’s (DOH) “flawed” use of its P67.32-billion pandemic funds, which state auditors recently found to have deficiencies.

“The DOH has a lot of explaining to do. We expect the Senate investigation will help correct these deficiencies, seek accountability and ensure future funds are better managed,” Senator Grace Poe said in a statement Thursday.

In pushing for a probe through a Senate resolution, Poe stressed that the “implementation deficiencies denied our countrymen their right to health at a time when it is most needed.”

“These funds were provided to strengthen the agency’s health resources in light of the COVID-19 pandemic,” she said.

“Instead of being utilized to support and boost the country’s pandemic response, the funds either remained idle or were not properly and immediately used for their purpose,” she added.

Poe noted that the Commission on Audit (COA), in its report, mainly attributed the deficiencies to DOH’s supposed non-compliance with pertinent laws and regulations, including use of funds not for intended purpose, low or zero utilization, improper charging of transactions, doubtful liquidations, procurement without legal basis, and procedural flaws, among others.

COA also said the deficiencies contributed to the challenges and missed opportunities encountered by the DOH, which is the agency primarily tasked to respond to the pandemic.

“These deficiencies prove to be counter-beneficial to the government’s efforts to curb the spread of the disease at a crucial time. Instead of being utilized to support and boost the country’s pandemic response, the funds remained idle or were not properly and immediately used where they should go,” Poe went on.

“Inefficiencies in the midst of a health crisis make our people bear the brunt,” she added.

Poe’s resolution further cited COA findings which showed “procedural deficiencies in the procurement process, lack of documentation as well as lapses in implementation by the DOH of several projects involving at least P3.967 billion.”

COA also said that at least P95.675 million worth of medicines and inventories were expired or nearly expired due to “deficient procurement planning, poor distribution and weakness in internal controls of the department,” the senator further noted.

“The deluge of deficiencies that the Commission of Audit findings uncovered are alarming and disturbing,” Drilon said in a separate statement.

“It is imperative that we examine closely the DOH’s use of billions of pesos in COVID-19 response funds given the findings of the COA and the corruption allegations that hounded the agency’s procurement of various COVID-19 equipment and supplies,” he added.

Citing the COA report, the minority leader said the Senate should close in on the P3.97 billion worth of contracts and projects with procedural deficiencies in the procurement process and lacking documentation.

“This is where unscrupulous individuals or syndicates in the government dip their sticky fingers. We must examine this especially given the corruption allegations that involved the purchase of various COVID-19 equipment and supplies,” he said.

“Who was involved in these purchases? Which agency made the procurement? Where are these people now? Are they still in the government?” he asked.

Senator Panfilo Lacson, meanwhile, said the deficiencies found on the DOH’s handling of its pandemic funds will “definitely” be brought up during the Senate’s budget debates.

“This is among the many other issues hounding the agency,” he said in a statement.

For its part, the DOH earlier said it is currently addressing the deficiencies flagged by COA.

The department also maintained that in 2020, it has exerted efforts to effectively implement provisions of the two Bayanihan laws, “more particularly those health responses in this time of a state of calamity or national emergency amidst varying challenges.”