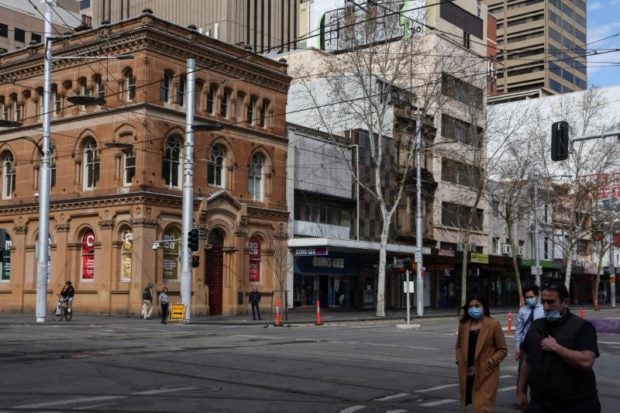 Pedestrians wearing protective face masks walk through the city centre during a lockdown to curb the spread of a coronavirus disease (COVID-19) outbreak in Sydney, Australia, August 9, 2021. REUTERS FILE PHOTO

SYDNEY — Police in Sydney will be given greater powers to enforce lockdown orders with additional military support to stem a growing outbreak of the highly contagious Delta variant of coronavirus, The Australian newspaper reported on Thursday.

With the outbreak growing by the day despite seven weeks of lockdown, police would be empowered to stop residents using loopholes in restrictions to travel outside the city, the newspaper reported.

The move comes after several outbreaks in regional towns across New South Wales (NSW) state, of which Sydney is the capital, raising fears the virus is spreading out of control.

The state government did not immediately respond to a request for comment.

A “significant” number of additional troops would be sent to beef up the operation, The Australian reported, without providing numbers.

Despite the stay-home orders, daily infections in NSW continue to hit record highs – 344 were reported on Wednesday – and several regional towns have also been forced into snap lockdowns.

Neighboring Victoria state on Thursday reported 21 new locally acquired cases, up from 20 a day earlier as 5 million residents of Melbourne, the state capital, prepare to enter a second week of lockdown.

Of the new cases, six spent time outdoors while infectious, a number which authorities have said must return to near zero before restrictions can be eased.

Authorities on Wednesday extended the lockdown in Melbourne for another seven days until Aug. 19.

Australia has largely avoided the high coronavirus numbers seen in many other countries, with just under 37,400 cases and 944 deaths, and several states remain almost COVID-free despite the outbreaks in Sydney and Melbourne.

But the rapid spread of the Delta variant in New South Wales and a slow vaccine rollout has left the country vulnerable to a new wave of infections.

Only around 24% of people above 16 years of age are fully vaccinated, and experts see Australia heading into a cycle of stop-and-start lockdowns until a higher vaccination coverage is reached.