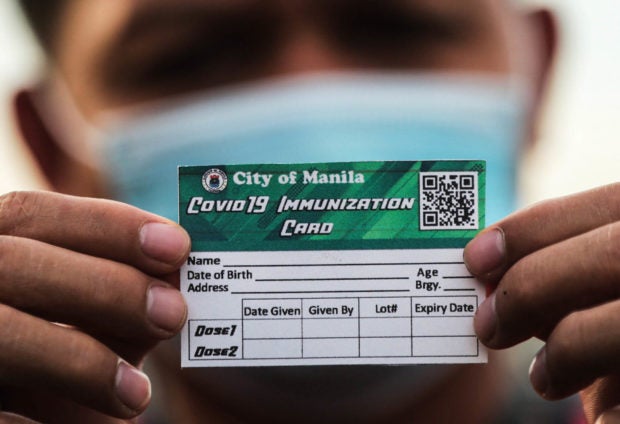 MANILA, Philippines — The lack of a common or unified vaccination card is starting to cause problems especially for inoculated Filipinos seeking to travel abroad, including overseas workers.

In a post on Twitter on Tuesday, Foreign Secretary Teodoro Locsin confirmed that the vaccination cards issued by the Philippine government would not be honored by Hong Kong authorities because they did not come from one source.

As a stopgap measure, the Department of Foreign Affairs (DFA) said it would negotiate with Hong Kong authorities to recognize instead the vaccination card being issued by the Philippine Bureau of Quarantine (BOQ).

“We hope that this will be acceptable to the Hong Kong side,” according to Consul Paul Saret of the Philippine Consulate in Hong Kong.

The Department of Health (DOH) on Wednesday confirmed that all travelers leaving the Philippines could use the International Certificate of Vaccination or yellow card as proof of their vaccination.

In its Advisory No. 55-A, the National Vaccination Operations Center (NVOC) chaired by Health Undersecretary Myrna Cabotaje said that outbound travelers who have been fully vaccinated in the Philippines may apply for a yellow card at the BOQ, in case the destination country required such proof of vaccination.

The NVOC advisory, dated July 16, 2021, but made public only recently, said that those who wanted to apply for a yellow card should register for an appointment using the BOQ online booking system (boq.pisopay.com.ph).

However, the advisory said this was only an interim guideline while the country’s unified vaccine database was yet to be fully in operation. The Department of Information and Communications Technology (DICT) is in charge of putting up the Certificate of Vaccination Record portal.

In another tweet on Wednesday, Locsin said he would also ask Hong Kong Chief Executive Carrie Lam about their decision not to recognize Philippine vaccination cards.

“I’ll ask Carrie Lam formally why not. I have always been supportive of her superb management of Hong Kong,” said Locsin.

The Hong Kong policy is expected to affect about 3,000 overseas Filipino workers who were set to fly back to their employers after the Hong Kong government lifted its travel ban on the Philippines.

According to the consulate, Philippine vaccination records were normally being issued by different LGUs and Hong Kong was demanding a standardized form to ensure authenticity.

The consulate said it was in constant communication with both the Hong Kong authorities and the DFA to resolve the issue soon.

Assistant Foreign Secretary for Strategic Communications Eduardo Meñez said that since Hong Kong just reopened on Monday travel from some countries, including the Philippines, he believed that most Filipinos were probably not allowed to board flights if they did not possess all the requirements for entry into the former British colony, including an acceptable vaccination card.

Meñez said the DFA has so far not received reports about other countries rejecting Philippine-issued vaccination cards.

“But each country has different regulations, so all travelers are advised to check before [they] travel,” he said

Many countries particularly in Europe have been reported to require proof of vaccination for travelers to countries in the region.

Section 12 of Republic Act No. 11525 or the COVID-19 Vaccination Program Act of 2021 signed in February this year mandated the DOH and the DICT to issue digital vaccination cards with a uniform format that conform with globally accepted standards.

In its reply, the DICT said it could not yet issue digital vaccination cards because of outdated records from local governments and its own systems. It said the issuance of a vaccine certificate of record was “temporarily held in abeyance.”

“The records are presently being updated by the local governments and we continue to support the efforts to keep all vaccine records current, harmonized, and up to date,” the DICT said in a statement.

As a result, each LGU had its own style of vaccination card usually suited to the mayor’s trademark colors.

Locally, a standardized card became a necessity after the Inter-Agency Task Force for the Management of Emerging Infectious Diseases earlier said that fully vaccinated individuals traveling within the country could already skip tests for COVID-19 as long as they could present domestic vaccination cards from a legitimate establishment or a certificate of quarantine completion.

Several local government officials have cited the need for unified vaccination cards as soon as possible.

Last July 9, the DICT said it was looking at launching the distribution of COVID-19 vaccination certificates—which holders could use for international travel—by early August. Nothing has come out of this so far.

This would be a huge backlog even if the DICT were to start issuing a unified vaccination card as required by law.

Read Next
Quarantine for close contacts back to 14 days, fully vaccinated or not
EDITORS' PICK
PH logs 665 new COVID-19 cases, lowest since July 2020
Gov’t eyeing COVID-19 vaccine booster for essential workers, indigents by Dec. 10
Villar Group gears up for AllValue Shopping Party on Dec. 3; around P 1-million promos and discounts up for grabs
Omicron poses ‘very high’ global risk, countries must prepare–WHO
A delightful blessing!
Legarda: Ending Violence Against Women, a cause for all
MOST READ
Quiboloy warns of ‘much worse than Omicron virus’ if his ‘persecution’ is not stopped
Bongbong Marcos’ conviction in tax case not a crime involving moral turpitude — lawyer
Omicron poses ‘very high’ global risk, countries must prepare–WHO
Marcoleta defends pol ads on ABS-CBN
Don't miss out on the latest news and information.