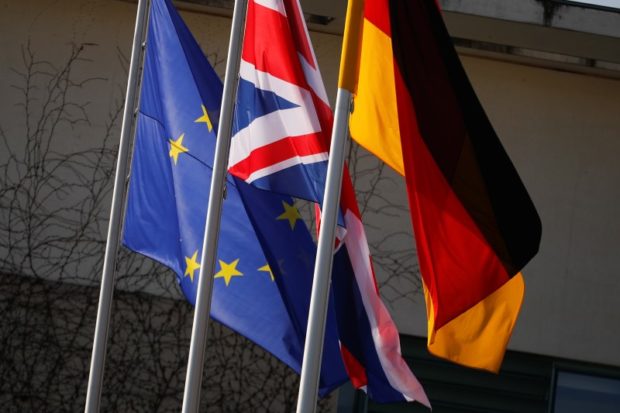 European Union, British and German flags flutter in front of a chancellery ahead of a visit of British Prime Minister Theresa May in Berlin, Germany, April 9, 2019. REUTERS FILE PHOTO

BERLIN — Germany police arrested a British man on Tuesday who worked at the British embassy in Berlin on suspicion of passing documents to the Russian intelligence service in exchange for cash, prosecutors said on Wednesday.

German prosecutors said that the apartment and workplace of the man, identified only as David S., had been searched and he would be brought before an investigating judge later on Wednesday.

“On at least one occasion, he passed on documents he had obtained in the course of his professional activities to a representative of a Russian intelligence service,” the chief federal prosecutor’s office said in a statement.

“The accused received cash in an as yet unknown amount in return for his transmission of information,” it added.

The man was arrested on Tuesday in Potsdam, just outside Berlin. He was employed as a local staff member at the embassy until his arrest, which was the result of a joint investigation by German and British authorities, the prosecutors said.

Read Next
Palace calls out Robredo’s ‘politicking,’ ‘nitpicking’ of gov’t COVID-19 response
EDITORS' PICK
FDA reviewing COVID-19 vaccines’ EUA for booster shots
Legarda emphasizes role of ICC/IPs in nation building this IP month
NCR’s COVID-9 alert level may be downgraded from 3 to 2 soon — DOH
What’s at stake for every fighter at ONE: NextGen
Climate Change Commission and Nestlé PH to discover sustainability-focused solutions
Biden vows to stand with Asia on freedom, hits at China on Taiwan
MOST READ
Drivers now required to take driver’s education upon license renewal – LTO
Gordon to Duterte: You? Teaching me courtesy?
Marcos Jr’s ‘special diploma’ from Oxford: You can have it, too
Can Marcos Jr. be disqualified?
Don't miss out on the latest news and information.