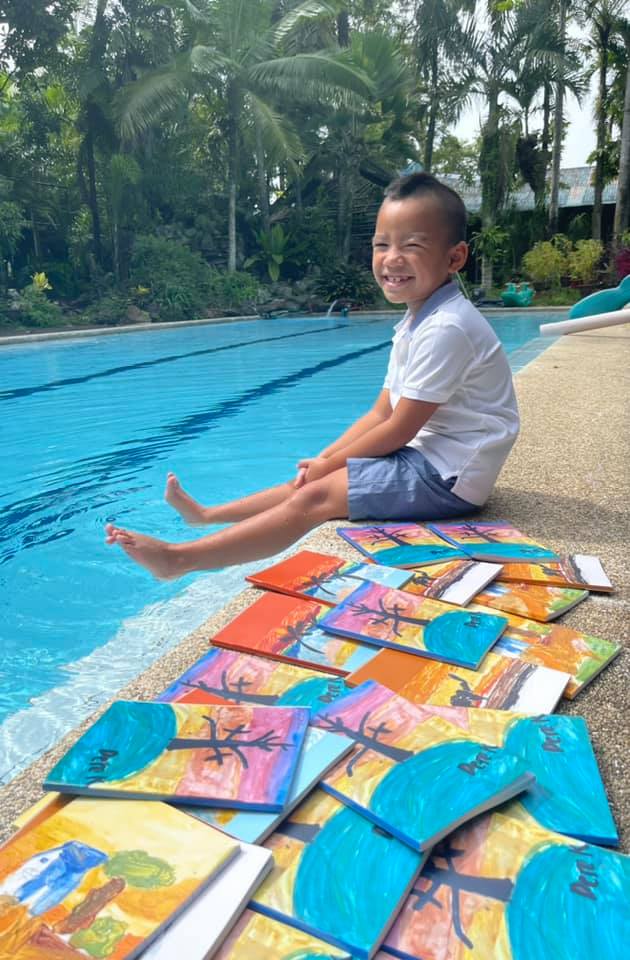 As requested by his parents, Derek started saving money for it.

But just recently, the boy, a Grade 2 pupil at the University of Saint La Salle in Bacolod City, learned that his classmate Casean Tambasen was diagnosed with Pontine Glioma with secondary hydrocephalus and cerebellar tonsillar herniation.

According to a medical website, Pontine gliomas are malignant (cancerous) tumors that originate from the part of the brain known as pons.

Anxious about what might happen to his classmate, Derek decided to forgo his plan to buy an Xbox and instead use the little money he has to help Casean.

Derek, a budding artist, started to sell notebooks with prints of his artwork on their covers to help raise funds for the medical bills of his sick classmate.

People have come together to help Casean’s family.

Derek wanted to do his part too, said his mother, Gianne, a ballerina.

“He (Derek) made more paintings to be printed on the covers of notebooks to be able to give more to help Casean,” said Gianne.

Gianne said Derek told her: “Mom, I don’t need the Xbox. I’ll give the money to Casean. It is more important to help save a life.”

Derek has never met Casean even if they are classmates because classes have been done online amid the COVID-19 pandemic.

Gianne said she was deeply moved by Derek’s act and told him to pay forward for the blessing of being healed when he was younger.

“What a miracle that in less than two hours, even without surgery, his intestines were back to normal as seen in the ultrasound. He was sent home right away as he was 100 percent well without treatment,” Gianne said.

When Derek was two years old, he was also diagnosed with Nephrotic Syndrome, a kidney disease, and had to undergo treatment for eight months.

“In just a month, he (Derek) was back to normal, overcame it completely, and has been very healthy ever since,” Gianne said.

“Growing up, we always remind him to be a blessing to others because God had blessed him with big miracles,” she added.

Gianne appealed to the public to support her son as he shares the miracles in his life with Casean.

Derek is selling his notebooks at P100 each to raise funds for Casean.

Those who wish to help may send a message to his mother on her Facebook page at https://www.facebook.com/dgsanson.

“More and more people have been buying Derek’s notebooks, and every time someone buys, his reaction has been priceless,” his mother said.