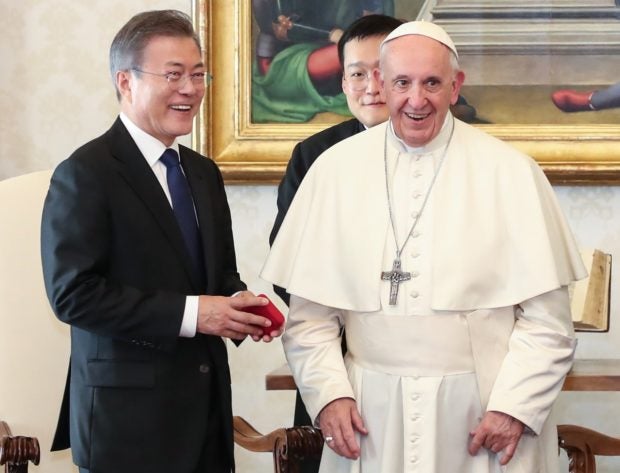 President Moon Jae-in speaks with Pope Francis during his state visit to the Vatican on Oct. 18 2018. Yonhap via The Korea Herald/Asia News Network

SEOUL — South Korea’s budding efforts to resume diplomacy with North Korea are once again fanning expectations for a visit to the reclusive country by Pope Francis.

Since the recent reopening of the direct hotlines connecting the two Koreas, officials are reviewing a slew of ideas to expedite inter-Korean talks such as setting up a virtual conference system or holding a family reunion event during the Chuseok holidays in September.

Renewed attention is also being paid to the possibility of a papal visit to North Korea. Any such visit would be a first as no pope has ever visited the communist country, where the only active religious leaders are reportedly Buddhist monks and Protestant ministers.

At the time, the pope responded positively to the invitation but the plans fell apart after the third summit between Kim and then-US President Donald Trump ended without an agreement in Hanoi in early 2019.

“Kim Jong-un, educated in Europe, is well aware of the symbolic meaning of a papal visit,” said Yang Moo-jin, a professor at the University of North Korean Studies in Seoul. “Given that his ultimate goal is his country being recognized as a normal country, there seems no reason for him to refuse the visit this time.

“Some critics say Kim may be reluctant to accept the visit, during which human rights issues could be raised. But I think those issues can be resolved later in phases once the visit is realized. The visit itself will greatly inspire Kim and his people to engage with the international community,” he added.

Even when diplomacy with the North had all but collapsed, Moon, the nation’s second Roman Catholic president, continued seeking cooperation from Catholic leaders around the world in his efforts to reengage North Korea.

More recently, Seoul’s intelligence service chief, Park Jie-won, hinted last month that the government was working in close consultations with officials in South Korea and the Vatican to arrange a papal visit to Pyongyang.

Archbishop Lazarus You Heung-sik, the new prefect of the Congregation for the Clergy, also expressed his willingness to arrange such a visit before he departed for the Vatican on July 29 to assume his new post.

“I know that Francis wishes peace on the Korean Peninsula, and his visit to Pyongyang will have several merits for the North, such as gaining a foothold in the international society and potential economic help,” he said at a press conference.

Observers say full-fledged discussions toward a papal visit are expected to start later this month, after Seoul’s joint military drills with Washington. News reports here said Moon could pay a courtesy call to the pope during the G-20 Summit, set to be held in Rome in October.

Cheong Wa Dae, however, declined to confirm any such courtesy call was planned, citing security issues. The presidential office was also cautious about discussing plans for a papal visit to Pyongyang, saying, “It is not appropriate for us to comment on the issue.”

Still, COVID-19 remains an obstacle. Despite the latest communication links, North Korea is said to be extremely sensitive to in-person contacts amid its prolonged border shutdown.

“Now we are placing steppingstones again for the ultimate goal of the denuclearization of the Korean Peninsula,” a Cheong Wa Dae official said on condition of anonymity, referring to the pending working-level talks between the two Koreas after a hiatus of almost 14 months.

“A papal visit to North Korea would become the catalyst in the peace process.”