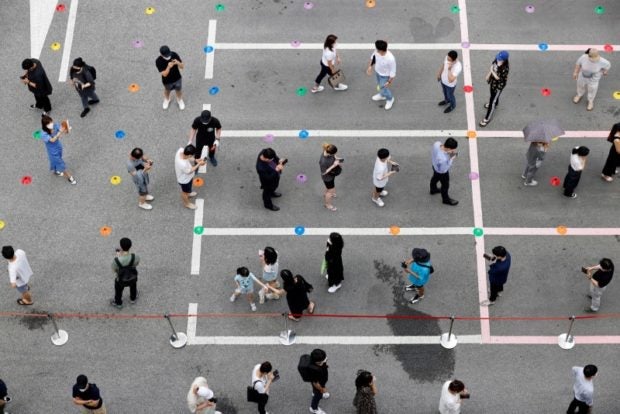 People wait in line for a coronavirus disease (COVID-19) test at a testing site which is temporarily set up at a public health center in Seoul, South Korea, July 9, 2021. REUTERS FILE PHOTO

SEOUL — South Korea gave vaccine developer SK Bioscience the green light on Tuesday for a Phase III study of its COVID-19 vaccine candidate at a time of vaccine shortages, when a spurt in infections is fueling demand.

The clinical trial of GBP510, the candidate for the first domestic vaccine, will weigh its immunogenicity and safety against AstraZeneca Plc’s vaccine, drug safety minister Kim Gang-lip told a news conference.

Three thousand of the 3,990 adults in the trial will receive the experimental vaccine and 990 will get AstraZeneca doses, with an interval of four weeks, Kim said.

In a statement, SK Bioscience said data from early trials of 80 healthy adults who received the two-dose protein-based vaccine showed they all induced neutralizing antibodies against the virus.

Shares of the company, which debuted in March, rose as much as 29.5% to hit a record on Tuesday, outperforming a decline of 0.6% in the benchmark index.

SK is also a contract manufacturer of vaccines for AstraZeneca and Novavax Inc.

South Korea, with a tally of 213,987 infections and 2,134 deaths, has fully vaccinated 15.4% of its population of 52 million, largely using doses from AstraZeneca, Pfizer and Moderna Inc.

But on Monday, the government said Moderna would deliver less than half this month’s planned shipment, due to production issues.

The government had earlier said seven local drugmakers were set to launch the final phase of clinical trials in the year’s latter half.

SK is the world’s second firm to try a comparative trial with another vaccine after French biotech Valneva’s Phase III trial against the AstraZeneca shot, the drug safety ministry said.