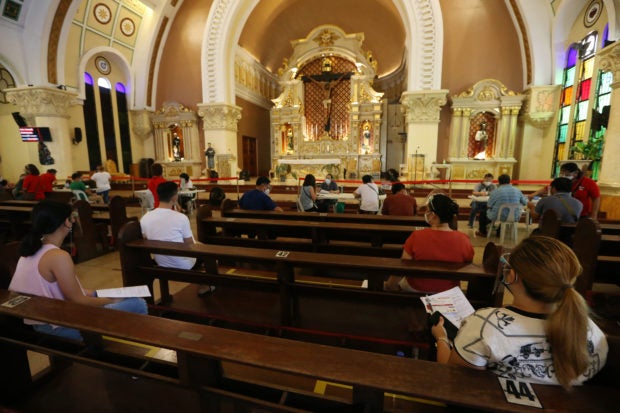 HOLY GROUND Residents of Quezon City gather at Sacred Heart Parish Shrine in Kamuning district on Monday to receive their second shot of AstraZeneca’s COVID-19 vaccine. The church is among the places of worship that Catholic parishes around Metro Manila have offered to become inoculation centers as the government ramps up its vaccination drive. —NIÑO JESUS ORBETA

MANILA, Philippines — The government has yet to reach its target of inoculating 250,000 residents in Metro Manila every day during the enhanced community quarantine (ECQ), National Task Force Against COVID-19 deputy chief implementer Vince Dizon said on Monday.

“Our local government units (LGUs) are trying hard but it’s really not that easy to vaccinate such a big population in the coming days,” Dizon said.

He said the delay in the vaccine supply due last weekend was caused by the late release of the certificate of analysis of Sinovac vaccines. It was finally issued on Sunday and the doses were on their way to LGUs in the coming days, he said.

The MMDA earlier requested four million vaccine doses during the ECQ as part of efforts to slow down, if not stop, the spread of the more transmissible Delta variant.

On the national level, Dizon said that after reaching a high of 710,000 daily doses administered last week, the government planned to surpass its target of 750,000 jabs a day for as long as supplies were sufficient.

“Our greatest challenge is supply. This is a challenge not only to the Philippines but to the entire world, especially countries that don’t manufacture their own vaccines. We can do one million a day, as long as there is a supply,” he said.

The pace of vaccination is expected to increase as the so-called mega vaccination facility built by tycoon Enrique Razon Jr. on a vacant lot of the Nayong Pilipino Foundation is set to operate as early as today.

The Inquirer learned on Monday that the inoculation site — the subject of a dispute between the former head of the government-run foundation and the billionaire businessman — would initially be able to administer 6,000 doses a day.

“This will eventually be ramped up to 10,000 per day,” said an official familiar with the plans for the site.

The mega vaccination facility has eight buildings, each able to accommodate up to 50 people.

There is also a 10-lane drive-through vaccination facility for those who want to receive their jabs in their vehicles.

Meantime, children with underlying health conditions would be a priority should the government push through with its plan to vaccinate its younger population this year.

Health Secretary Francisco Duque III said he was in favor of starting pediatric vaccination as early as next month as long as there was enough supply to expand vaccine coverage by 20 million more people.

Senators on Monday also acknowledged the need to begin targeting children in the government’s inoculation drive but some expressed doubts about the budget cover, the quality of available jabs, and whether it was fair to vaccinate minors when more vulnerable Filipinos remained unprotected against COVID-19.

“Confronted with the vaccine shortage, it’s not fair to talk about vaccinating minors when those in other [higher] priority age groups have not been vaccinated,” Sen. Nancy Binay told reporters on Viber.

Sen. Panfilo Lacson also suggested that the 2022 budget proposal already be made to reflect the additional funding requirement “in case they can implement the vaccination of minors in 2022.”

Sen. Risa Hontiveros said she agreed that children’s safety should be the highest priority, adding that she hoped vaccine manufacturers would invest more on pediatric trials to resolve safety issues.